I frequent a bookshop in a neighboring town that sells books for and about writers, along with writing-related merchandise (if you’ve been to Port Townsend Washington you know which store I mean). They carry postcards and T-shirts with writing slogans like “Avoid Clichés like the Plague”. Cute. Unfortunately, it denigrates clichés. The meaning of the word has been ‘adjusted’, and unfairly so, IMHO.

Hear me out. I’m not endorsing the constant use of ‘isms’ we now label as cliché. But the word has become synonymous with trite, and that’s unfair. While some clichés may be trite, most are merely unoriginal, though with good reason – they’re shorthand for knowledge that’s been established throughout the ages and shown to be generally true. 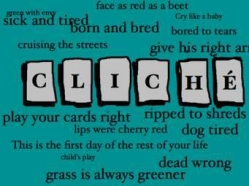 When selectively used, a good cliché expresses wisdom through metaphor. A stitch in time figuratively saves nine. Actions often do speak louder than words. Sometimes it is a dark and stormy night, but since that opening line shows up more in humorous writing nowadays, we expect it to be funny, not dark. Like cliché, the expression’s meaning has been ‘adjusted’.

Not a unique situation in phrases or in words. So many words have been adjusted – either with new meanings added on, or by having their definition abridged to one exclusive meaning. In one of my older posts (see July 17, 2019) I mentioned how Clarity in writing must include weighing a word’s intended meaning against what it’s perceived to mean.

Also consider how even when the word’s meaning should be clear, many don’t understand what the word means. Take secret, for example. It’s supposed to mean confidential, not to be disclosed, but too many people seem to be unaware of that, otherwise they wouldn’t try to get you to reveal a secret. Isn’t the very meaning of that word to withhold information based on a vow?

Or take the word average. It’s a mathematical term, meant to express the value of a group of data by adding it up and dividing it by the total of their number, yet it’s taken on social connotations. We hear the expression, the average person, or man, or woman, and wonder what that could be. We equate average with falling straight down the middle of a ranking system, not being good or bad, not taking sides. Somehow average has become something to avoid, either as a person or as an opinion. And don’t get me started on how compromise has become synonymous with cowardice.

How about proud? According to my dictionary the noun proud means: feeling deep pleasure or satisfaction as a result of one’s own achievements, qualities, or possessions, or those of someone with whom one is closely associated. Have you heard anyone say they were proud of themselves, even without accomplishing an achievement (which I believe includes making the attempt, working hard and doing your best)? Or proud of a celebrity whom they’ve never met?

As a writer, knowing words – their meaning, and using them in the proper context to express thoughts – has become more challenging as the meaning of words have become ‘adjusted’. Have you noticed this trend? How have you ‘adjusted’ to it?