The last time I posted here, I was in the throes of a move to Boise, Idaho. My third novel was almost finished, although another couple of rounds of editing would take place before I considered it ready for publication. In the meantime, Champlain Avenue Books—publisher of my first two novels, Mending Dreams and Write My Name on the Sky—decided not to issue any new work, and at present they are closing their doors entirely. Therefore, I can’t announce that my latest novel, working title Turn Back the Clocks, is being published, but I’m actively seeking a publisher, so stay tuned.

Meanwhile, I’ve been writing short stories. And one of them, I was delighted to learn, was accepted for inclusion in an anthology published by The Cabin, a local literary arts organization in Boise. Idaho has a lot of writers, and a lot of readers—there’s not a lot else to do in the winter here, you know. And The Cabin has a lot of prestige within the community—I can now say my work has been included in the same book as a former Poet Laureate of Boise. 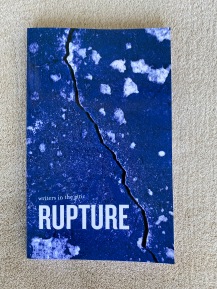 The Cabin chooses a theme for each year’s anthology, and this year’s theme was “Rupture”—kind of fitting, given the state of the world these days. When I saw the theme, guess what came to my mind?

Were any of you in Southern California on January 17, 1994? If you were, you probably remember the Northridge Earthquake. That was the only time in my life I truly thought I was going to die—waking up in the dark with the whole house creaking and groaning and the sound of glass shattering.

So, I decided to write a short story about the Northridge Quake. Now, I had a 1500-word limit, and it was hard to capture the magnitude—pun intended—of that event, so I chose to describe just a few minutes in the life of one person—Amy—who awakes, as I did, at 4:30 in the morning to the sound of her world crashing apart. She’s alone—her partner or husband, we don’t know which—has left, we don’t know why. And I needed to show what kind of person Amy is, without going into a lot of description. Well, actions speak louder than words, so I used a device which won’t surprise anyone who knows me well. Amy has a dog, and her overriding concern is, where’s the dog? She gets up, finds the dog—who is of course terrified and cowering in a corner—and tries to calm the traumatized animal. And in doing that, she kind of calms herself. She cleans up the glass from the kitchen floor so the dog, Luna, won’t shred her pads, feeds Luna, and waits out the aftershocks—there were more than a thousand in the aftermath. The story ends with Amy and her dog sitting together in the dark, waiting for daylight, and although it’s not stated explicitly, you get a sense that they will both be okay. (I’ll explain in a minute why I’m telling you the whole story instead of suggesting you buy the book.)

So I sent the story off, and a few months later I was thrilled to get an email from The Cabin, saying they’d chosen my story, which I called “Fault Lines,” to be included in this year’s anthology, titled “Rupture.” The email also informed me that they’d received 293 entries, and out of those had selected just 50. So I felt pretty good about that.

Unfortunately (or perhaps not so unfortunately), The Cabin is largely staffed by volunteers, and as a nonprofit it runs on a very small budget—which is why “Rupture” won’t be widely distributed. You won’t be able to search for it on Amazon. Eventually—and it hasn’t happened yet, but it will—”Rupture” will be featured on their website and will be available for purchase, but don’t hold your breath. And there’s no free shipping either! I hope to eventually be able to post a PDF of the story on my website; I did retain all rights.

Since I did have some success entering this story in . . . well, it’s not exactly a contest, as there were no cash prizes, but I was competing against a field of other writers—I thought I’d discuss the value of entering writing contests, especially short story contests. It’s a good way to gain visibility for your writing, and sometimes you even get paid.

I’ve lost count of the number of contests I’ve entered, and most of the time I don’t win, but I have had enough small successes to keep me encouraged. And sometimes, if you win a contest, it boosts your chances of selling that story somewhere else. That happened to me the year after I moved to Idaho, when I entered the Idaho Writers Guild’s short story contest. A story that had been rejected by several literary magazines actually won first place! Not only did I get a cash prize and a nice certificate, I went on to sell that story to “The Bark” magazine—it was a story about a dog, of course—and “The Bark” paid me even more money!

Now, how do you find contests, and how do you know which ones to enter? There is usually a fee, mostly around $25-$50, so you don’t want to go entering them willy-nilly unless you have a lot of cash to spare.

“Poets & Writers” Magazine has a bi-monthly list of writing contests, and so do other writer-centric publications and websites.

If you see one that interests you, before you submit, go to the contest’s website. It’s usually a literary magazine or website that publishes other stories and runs a contest a couple of times a year. They often post previous winners, so take a look and see if the winners are anything like what you’re writing—not so much the storyline, but the styles and themes you see. If you want to send in a literary piece and all you see among the winners are slasher stories or aliens from space—probably not the kind of contest you’d be likely to win.

Also, try to find out who’s judging the contest. Sometimes it’s just “the editors,” but occasionally they’ll publish the judge’s name, maybe even a little bio. Check that out and see if you get a sense of the judge’s taste. Not always possible, but if you can do it, and if the judge’s taste aligns with yours, you have a better chance of winning.

I actually did this with the Cabin’s anthology. I submitted a story two years ago for their anthology that was themed “Fuel,” and it wasn’t accepted. I knew nothing about that judge, but I did hear him speak at a conference after I’d entered the contest, and I knew just from listening to him that I probably was out of luck, and sure enough, my story wasn’t accepted that time.

However, this year’s judge was someone with whom I was familiar. I didn’t know him personally, but I’d seen him talk about the winners of another contest he’d judged, and I really liked the way he talked about the work and what he appreciated about it. I figured I maybe stood a chance this time, and sure enough, I was right.

There are nonfiction contests, and poetry contests, as well as fiction contests. So go and explore the landscape. Target a few possibilities and risk the investment—it may well pay off, not only in monetary rewards, but also in status, and maybe even publication. Good luck!

Bonnie Schroeder has been a storyteller since the fifth grade, when her teacher suggested she put her vivid imagination to work as a writer.  She took the advice to heart and has pursued the craft of fiction ever since. After escaping the business world, she began writing full-time, completing two women’s fiction novels, Mending Dreams and Write My Name on the Sky—both published by Champlain Avenue Books. She is currently seeking publication for her latest novel, working title Turn Back the Clocks.

She lives in Boise, Idaho, where she is a Vice President of the Idaho Writers Guild.