CeeCee James was recently a guest blogger here. Her story interested me as a multi-series author. I interviewed her for a UK magazine, and thought The Writers in Residence might like to read what she told me.

Several authors on both sides of the pond pound the keyboard with more than one mystery series but few write as many as bestselling CeeCee James. She has no fewer than seven different series out there. Most of them cozies, their eclectic plots feature pets, farm animals, flamingoes, recipes, a book club, circus life, history, a tour guide, and a host of other characters that people her world.

Her first published books, however, comprised a three-book award-winning series based on her own life that brought brilliant reviews as “heart-breaking, raw, and inspiring.”

Childhood experiences, good and bad, are often expressed in a writer’s fiction whether consciously or unconsciously and can be, say therapists, a way of working through them and letting them go.  In James’s case she frankly talks about her difficult times as a young girl, bringing a compelling depth, compassion, and growth to her characters and her writing.

But why so many series?

“My life has been full of adventures and journeys. We moved 40 times and I attended 10 schools from coast to coast. In all of my works I draw on my own personal struggles, shortcomings, and victories. I had a rocky childhood, and spent time in foster care,” she said. “I feel blessed I’ve been able to realize a childhood dream to be able to share my stories with others. I can’t imagine too many careers that are as rewarding,”

No surprise that her first series was largely autobiographical and based on many of her personal experiences, but then she lightened up and plunged into the world of murderous cozies. Starting with the Angel Lake Mysteries, it centers around new beginnings, marking a significant turnaround in James’s own life.

“My first mysteries are about the character, Elise, who is starting over and not quite sure where she fits in. Her journey is about finding confidence in who she is. There’s always a little bit of me in these characters, a voice for thoughts I didn’t know I had.” Next James explored the curiosities of hotel life with the Oceanside Hotel mysteries with plenty of humor from a mother and daughter team. 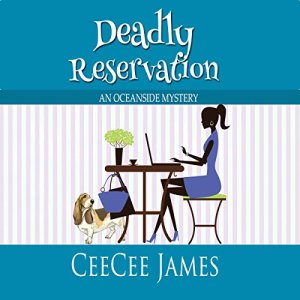 Then came the Baker Street Mysteries. Set in Pennsylvania the books feature a tour guide who presents re-enactments of the American Revolutionary War. The author moved on from 1775 to take readers into circus life, with the first in the series titled Cirque De Slay.

Time to switch hats again, and James produced the Flamingo Realty Mysteries, wherein she blends in a couple of characters from her previous series.

Among reader favorites are the Mooved to Murder mysteries with their covers of cows, lambs and other farm animals, and her books with kittens and puppies. The newest series stars members of a book club in The Secret Library Mysteries.

How does she manage to keep them all straight?

“I write one series at a time so that gets all my focus. I time going back to my other mysteries when I’m ready to take a break from my current series. My favorite place to write is curled up in a fat, oversized chair with a cup of coffee and my two mini dachshunds sleeping at my feet.”

A favorite character among the many amateur sleuths? She said that each main character takes a turn as being her favorite at the time, especially when they are going through something she can relate with, and their vulnerabilities make her fiercely protective of them. When she moves on to a new series, she’s infatuated all over again “with a new baby.”

As for choosing settings James said she writes what she wants to read and what interests her at the time. She researches towns and villages looking for small restaurants and shops to get a feel for it and its flavor, many of which she has lived in at one time or another.  She looks up local plants and landscape terrain, and of course researches for toxins and poisons.

A “pantster” rather than an outliner, James finds her stories emerging as she writes.

“I tried outlining and immediately hit writer’s block. I have to have the freedom to let the story lead me. If I am really struggling with it I’ll reread an old favorite like Lord of the Rings, or The Stand. I admire those authors’ skills so much it almost always inspires me.”

The past that has provided grist for the mill drives her intense interest about how other people experience their lives. The pandemic, too, has brought back memories of feeling trapped.

“I was surprised to find that feeling lurking around in my subconscious. I remember the strength and hopelessness of that emotion while growing up. It hit me in a very weird spot.”

In between James’s massive literary output, she paints in several media including watercolor, ink, and acrylics. She also makes miniatures, and crochets during which one imagines her mind is working overtime to plot another crime.

I’m so thankful that both my mom and my dad put pen to paper while they were alive to draw and write out lasting legacies for me to cherish now that they are gone.

Mom cooked the whole feast, all the fixings and desserts, until way after she had great-grandchildren. When she was no longer able, I took over the task for a few years before handing it down to my daughter-in law who excels in the kitchen.

Now, the week before Thanksgiving I thumb through the 3×5 cards in Mom’s old plastic recipe box, looking for the Cranberry Salad, the Holiday Mincemeat Cake, and the Chiffon Pumpkin Pie recipes. The writing is faint and blurred; the cards are stained. And my heart gives a twist as I picture Mom taking each one out and assembling the ingredients on the counter.  (This “treasured” box came to me 20 months ago when, at 94, she died.)

Six weeks ago my Dad joined her in Heaven. Now they are giving thanks to God continually, not just on our annual holiday.

In cleaning out my dad’s file drawers I found a stack of napkins about five inches high. I thought they were dust cloths for his crafting projects, until I took them out of the plastic bag. Instead of throwaways, I found ‘priceless’ pieces of art that I will treasure alongside my mom’s recipe box.

Daily for a year or so in 1999, Dad sat at their kitchen table and drew stick figure sketches of Mom in various situations, from housecleaning and cooking, to relaxing with a morning coffee on the patio, working a jigsaw puzzle, gardening,  and packing/traveling to Solvang on their anniversary.  Each filmy paper illustration has her comment in a balloon above her head. I can hear her saying them all! I admit, I cried as I looked at each one in the stack.

I’ll share a few of his sketches here, along with two of her “famous” Thanksgiving recipes. 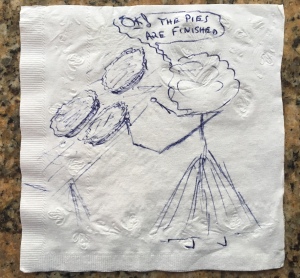 Grind (or process) the cranberries roughly. Add sugar. Let set 3 hours.  Add pecans,  pineapple, and marshmallows.  Dissolve Jell-O thoroughly in boiling water. Add to the above mixture and set aside to mold. (When slightly thickened, stir down the marshmallows.)

How glad I am that my parents took time to write out and draw “every day” things.  They may never be published (other than on this blog), but they are as enduring and endearing to me as any literary classic or masterpiece painting.  They are the hearts of my Mom and Dad.

Creativity in any form is a gift from God and destined to bless (or change) someone.  Keep on creating from your heart. You’ll never know who will pick up a piece of “you” and smile (or cry).