The big “What if…” offers writers a limitless world of characters, plots, settings, and time frames, a chance to change history, to bend it a little. What if Henry VIII died at birth? What if General William Sherman never undertook his famous March to the Sea? Shakespeare would have been deprived of many of the plots for his plays and Scarlett O’Hara would have had no reason to be created.

The good news is, much of our past provides those who write historical fiction with stepping off points for their novels, with real characters who resound throughout the ages but can be given sham qualities they never possessed in real life.

Yet, how much twisting of the truth do these books require to suit the author’s fictional story? Is it a dilemma, a difficult choice, or a decision to blithely rewrite history? As for those writing non-fiction, do the same criteria apply?

The case of James Frey comes to mind as I mention it in my new novel that is – surprise! – based on a true story. Frey’s memoir, “a Million Little Pieces,” was revealed as fake although he was reported to have asked his publisher to release the book as a novel. However, Random House decided sales would be greater as a true story. To his credit Frey admitted he fabricated and exaggerated parts of the book.

Which brings me to a personal point regarding fiction, non-fiction, and writing the truth. A few months after September 11, 2001 I was approached by a young woman who said she had been married to one of the hijackers. She wished to tell her story.  As a ghostwriter I published several memoirs, biographies, and autobiographies under my clients’ names.

Long story short, I wrote the book for her. Then I printed it out and slipped it into a drawer. I didn’t look at it either in hard copy or digital form but kept the document on my laptop and on a thumb drive during all the years since.

The pandemic, forcing writers into greater isolation than usual, and for more than a year, has changed our way of life, and in my case, shredded any writerly income I was making as a hired hand. During those 13 months I thought about books I’d written and set aside, and decided to take a second look at the 9/11 story.

For several reasons I decided to turn the true story into as a novel. Luckily, I had retained all the documents including the marriage certificate, divorce decree, photos of her with the Said Arabian she married at 17 years old, and cassette recordings of her and her family. I also had written a 40-paqge non-fiction book proposal which resulted in my being signed up by a top New York literary agent. It was 13 months after the 9/11 attacks. However, the upshot was that no publisher would touch it.  The agent suggested they were afraid of reprisals because the book provides a rare, under-the-radar- glimpse into the terrorists’ personal lives in America, their loves of strip clubs and pizza, for instance, and the kinds of activities that should have served as red flags to law enforcement agencies.

Turning the non-fiction story into fiction was easy. I had all the background I needed both on tape, with photos,  and in documents. With Frey’s experience in mind I was careful to stick to the truth to back everything up but as the book was fiction, who would worry about its origin? The subtitle clearly states that the book is based on a true story.

Over the past two weeks I have received glowing reviews, all 5-star to date, and my dear neighbor, a retired CEO of a large company who writes a newsletter, said he’d be happy to give it some space. He added as an afterthought that would have to write the word “true” in quotes. He did not believe any of it happened, that it was too far-fetched. At first I remonstrated, then told him I really didn’t care if he believed it or not. I knew the truth.

Which brings me back to the point of this post: authors taking actual history, or history as reported, and subverting it to their own ends to make a book more interesting as some of our greatest writers have done. Is there a lesson here? Will youngsters believe the fiction or the real truth?

Words, words, words. More than three million of them.

That’s how many a Tamil in India wrote. Granted, the words were spread over 26 volumes but still, quite remarkable. Chinese authors wrote lengthy books, too, while contemporary writers like J.R.R. Tolkien confined himself to a mere 558,003 words to complete The Lord of the Rings.  J.K. Rowling wrote 1,084,170 words in the Harry Potter series. Carl Sandburg threw half a million words onto the pages of Remembrance Rock, while Stephen King prefers to write long, and his thriller, It, has a whopping 1,138 pages for a paperback price of around $30.  A bit heavy for reading in bed. Kurt Vonnegut’s Slaughterhouse Five is around 500 words under 50,000, and Tolstoy’s War and Peace that everyone thought to be the longest book in the world offers 587,287 of text.

I was curious last week as to word count while putting the finishing touches to my 9/11 novel. Based on a true story, I found, to my horror, that the manuscript only contained 61,000 words. I know for cozies that is acceptable but anxious to check out what the going word count was for novels these days I went online to research.

Happily, the consensus is that the majority of publishers are content with a range of 50,000 to 100,000 of an author’s polished prose. One site claimed that anything over 40,000 is acceptable. However, books by C.S. Lewis, Roald Dahl, and George Orwell among others were bestsellers with books under that number of words.

It actually depends on genre. A literary novel, one site tells me, and by the way what the heck is a literary novel as all writing is, by definition, literary, no? No. It turns out that literary fiction must be intellectual, have depth, character and style. Surely, mysteries fit right into the middle of those requirements.

Publishing industry standards can vary. Authors of romance novels typically write between 80,000 to 100,000 words, and science fiction and fantasy can exceed 140,000. Westerns are, surprisingly, shorter, between 45,000 and 75,000, and novellas can be from 18,000 to 40,000 words The Reedsy blog site points out that a too-long word count is a symptom of a major plot or pacing problem.  First drafts can usually tell us whether we’ve overstepped the yardstick, and where to cut. Most editors warn writers not to edit their manuscript until that first draft is complete, and keep an eye on bringing too many characters into your story.

It is tempting to include extraneous material when your write about a favorite hobby or pastime you love but it’s a no-no for publishers unless it’s a theme like knitting, baking, or cheese. Frankly, I enjoy learning something new and my current read, The Crossing Places by Elly Griffiths is an archaeological mystery that briefly explains many of the basics of the discipline in dialogue, the perfect place. 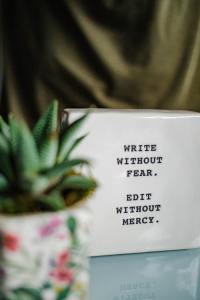 Thus armed, I began to edit my latest novel’s first draft and found I was right in the ballpark of acceptable word count. Of course, if you are going to self-publish with KDP, or other places, you can make up your own rules. But if readers expect a certain number of pages in your series it makes sense to adhere to that. Another point to keep in mind is that if you are adding an audiobook to your editions it could require a rather lengthy listening period that could get tiring.

A godsend to writers is the software that continually counts your words as you write and at the same time posts the page number you are currently on. A few writers I know never look at those results over periods of days or weeks in order to be wonderfully surprised when they finally do take a peek. Or not. They say that being required to produce or eliminate a certain number of words is soul destroying.

As several authors have commented when considering word count: “When it’s done, it’s done. When the tale is told, it’s told.”  End of story.