(I’m early this month with my post, because I switched with the “other” Jackie – Jackie Vick  – who will be posting on Self Publishing on August 18th.)

I’ve recently read two books which are billed as “cozies” but have none of the more modern sewing, crafting, cooking, library/bookstore, tea shoppe/coffee house, or pet themes that we’ve grown accustomed to. (There’s nothing wrong with these if they are what you like to read!)

No, these were the “old fashioned” style mysteries, that are super-plotted, character-strong mysteries like Agatha Christie wrote. Clean, as far as no on-the-page sex, vulgarity, profanity, or excessive violence. Just good, captivating, complicated mysteries, sometimes in unique settings.

Here are reviews of the two  books I read. 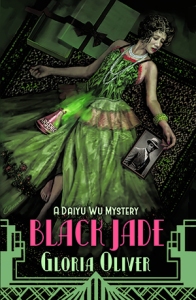 What a fascinating book! It’s very different from the usual historical cozy mysteries out today. It has a main character who is unique and amazing in her disability, living in a disguised house with her once royal parents and a pair of staff who love and protect on her.

Black Jade, A Daiyu Wu Mystery by Gloria Oliver, is set in Texas in the early 1900’s, when the race issue is prominent against Asians, specifically Chinese, who are considered to be the “Yellow Menace.” Even more of a bias however in this story, is the rich vs commoner distinction. So when the second son of a British Earl comes to America and falls for a ‘common’ girl who is a waitress in a speakeasy, his hoity-toity relatives across the Pond rush to the first ship heading west to try and stop him marrying her. The means they use is macabra and horrific, but only the blind, Chinese Miss Wu, working in her family’s laundry is able to discover it.

The rest of the book takes us on a detailed and fascinating investigation to find and identify, first the victim, then the villain. (My guesses hopped from one to another of the book’s characters: all in vain.) But Miss Wu, accompanied by Jacques, her handsome companion and chauffeur (who also narrates the story), along with her new friends, a female forensic doctor and a millionaire playboy, moves along as surely as a bloodhound following an invisible scent (burnt garlic?) to the killer. She meets obstacles at every turn, but this gal is persistant and clever, and inspires those around her to not give up no matter what. The climax scene is a nail biter!  FIVE STARS

PS: I totally loved Miss Wu’s little dog, who goes everywhere with her. He has a strange name – Prince Razor. When you read this book, you’ll find out why. 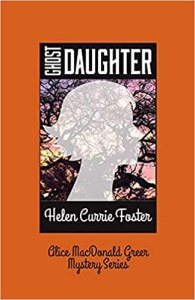 This is an amazing, sometimes jaw-dropping, mystery-adventure in which the heroine, Texas lawyer Alice Greer, risks life and limb to fulfill the last wishes of her friend Ellie. In Ghost Daughter, the newly widowed Ellie has discovered her long-lost daughter, conceived at age 17 and given up for adoption decades earlier. She wants to include her somehow in her estate and asks Alice to be executor if/when she dies.

Sooner than either expected, Alice finds her friend’s bloodied body in her own ranch house, along with a rearing, kicking, squealing horse! Yes, IN her house. LOCKED in. Huh? Instantly my mind tried to come up with suitable scenarios, but failed. There was nothing to do, but keep turning the pages.

And that was just the beginning of this fast-paced story with multiple complications and misdirections.

And what was so special in Ellie’s Santa Fe vacation house that could elicit murder? Alice tries to find out, but meets with “baddies” at each attempt. There are car chases through the mountains, unexplained  assination attempts, theivery of extremely valuable art right under Alice’s nose. And, if that isn’t enough, Ellie’s warring sons threaten to drive her up the wall with their arguing about who gets what. And the police can’t find the murder weapon or any evidence at all pointing to a suspect.

There are no giveaways in the plot. To the literal last pages I couldn’t guess how, why, and by whom the murder of Alice’s friend was done. Thankfully the author ties everything together in a grand scene at the end.  FIVE STARS

I enjoyed Ghost Daughter so much, that I purchased Ghost Cave, the first of Greer’s six  books in the series!

Oh, and by the way, there is nothing “paranormal” in her Ghost books.

I hope that in the future more of these new/old style cozy mystery books will be published. Books that challenge the reader to get out of her rocking chair and trudge the mean streets with the protagonist.

PS: I just noticed that both of these books were set in Texas.