I had the pleasure of getting to know one of our Writers in Residence bloggers, M.M. Gornell, more in depth last month and decided to write up my talk with her for the monthly column I write for a UK magazine called Mystery People.

I thought you might like to know what I discovered about Madeline so herewith is the story. The magazine included a photo of her and one of her book covers.

“The United States is such a whacking great country it encompasses every type of climate and terrain from deserts to glaciers, providing settings for crime writers in sand, mountains, seas, and snow.

Officially founded in 1776 and with archaeologists discovering tribes who lived here as long ago as seven millennia, America’s history of pioneers, gold miners, railway barons, and migrants continue to capture the imagination of writers. The push West from the East coast, where 100 or so Puritans from England disembarked from the Mayflower in 1620, has inspired books, movies, poetry, and songs, and created myths and legends.

How did these brave souls travel across the vast, undeveloped country?  One answer: Route 66.

One of the most famous, nostalgic, fascinating and historic highways that wagon trains of homesteaders traveled, along with migrants seeking fortunes in gold mines, land, and new opportunities, U.S. Route 66 was originally a 2,500-mile dirt trail that ran from Chicago, Illinois to Santa Monica, California. It was eventually smothered in asphalt and became known as the Mother Road, and the Main Street of America, passing through a total of seven states.

John Steinbeck memorialized Route 66 in his masterpiece, THE GRAPES OF WRATH, in which he described sharecroppers’ gritty hardships and hopes. It is said that there was no symbol more loaded with meaning in Steinbeck’s novel than Route 66.

Many over the years have jumped on the bandwagon (forgive the pun) from the Rolling Stones, the Shakers, and other British bands who wrote hits about Route 66. Currently the BBC is preparing to launch another “The Hairy Bikers” show starring the popular cooks who will be riding their motorbikes along the renowned U.S. highway; no doubt pausing at the famed old diners along the way.

One author who actually lives smack on Route 66 in a small community called Newberry Springs in the western Mojave Desert is crime writer M.M. Gornell, Madeline to her friends. A typical oasis in the desert, the small town’s surrounding area boasts man-made lakes, farms, and ranches, and is about 100 miles south of Death Valley.

Although her former residences have included other towns and the Sierra Nevada with its rich palette of Red Rock Canyon (the setting for her thriller, DEATH OF A PERFECT MAN), Madeline’s move to Newberry Springs inspired her to set the majority of her eight crime novels, including two series, along the famed highway. “For me, setting definitely comes first, then the story,” she said.

“Through some serendipitous miracle, probably springing from tiredness, the cost, and most importantly the feel of the place, we ended up in Newberry Springs. I come from Chicago, where Route 66 starts, and now I live at the end of it in California. I’m nowhere near to being an expert on the Road, not like real ‘roadies,’ and I’ve never driven the entire route, but in my mind, heart, and emotions the act of crossing this vast country has taken hold of my mind as a symbol for the hardiness and determination of the people who took it on, especially in those early days.”

As it proved for Steinbeck, Madeline said the name itself – Route 66 – is a pretty awesome beacon, leading the way in her writing adventures. “It is a constant writing inspiration.”

The multi-award-winning author’s first published work, including an Honorary Mention at the London Book Festival, was a short story in Alfred Hitchcock Magazine, which led to her debut crime novel, UNCLE SI’S SECRET. “It’s set in the majestic Cascade Mountain range where the seas of evergreen forests and the seemingly boundless waterways all combined to send my creative juices continually a-whirring”.

But California and Route 66 beckoned in the 1990s, due to mental pictures and expectations she had of the Mother Road twenty years earlier. It was not as easy as she had imagined, but new settings presented themselves and the majestic Sierra Nevada Mountains provided magnificent, magical scenery, inspiring her “Raven” mystery series, then LIES OF CONVENIENCE, and more recently her “Rhodes” mystery series. 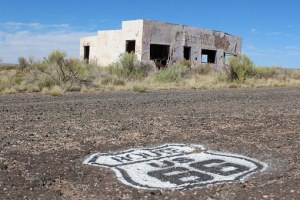 Although the romance of the route was a fixed American landmark, it was soon bypassed by the new Interstate Highway System which either paralleled it, resurfaced portions, or went elsewhere, leaving Route 66 abandoned and lined with ghost gas stations and tiny deserted communities. Eventually, it was officially designated as “ceasing to exist.” But you can’t keep an icon like the Mother Road down. It was rediscovered by musicians, hippies, artists, movie makers, and writers.

Madeline is an avid fan of British novelists P.D. James, Ngaio Marsh, Margery Allingham, Marion Chesney, and others of the Golden Age.  She is published by Aberdeen Bay which describes her books as literary mysteries. “My intent is usually to write a murder mystery but they’ve all somehow gotten out of hand and ended up more what I call ‘character studies’.

Asked if any of her life experiences have crept into her stories, and what exactly was her attractions to ravens, Madeline responds with a smile. “Those two things fit together in perfect harmony.

“Ravens are indeed a prime example of life experiences creeping into my story-lines, even into the titles, RETICENCE OF RAVENS  and COUNSEL OF RAVENS.

The ravens love our backyard, most likely because of the bird seed we set out. They seem to be intelligent and even fanciful. For reasons I can’t articulate, ravens seem rather mystical and mysterious. My writing mind went on from there.

“None of my stories carry “messages” but occasionally it can happen, especially after I select a title, and especially with the Rhodes series. I regard the Mojave and Route 66 as a sanctuary where no-longer-needed pasts are blown away in the dust.”

Like many authors, Madeline chafes at having to spend time promoting and publicizing her mysteries. But she enjoys talking to people in person where she can present them with bookmarks or even a few small samples of the stoneware pottery she creates when not writing.  She attends a few writers conferences and loves England but her favorite celebration is the annual Newberry Springs Pistachio Festival on Route 66. It attracts many Europeans, as well as locals, who are “doing the Route” and exploring its ramshackle old cafes, rental cabins, and trading posts.

It is a sure bet author M.M. Gornell will never run out of inspiration for her mysteries thanks to her choosing to live along this fixture of historic and popular culture.

Madeline (M.M.) Gornell is the author of six award-winning mystery novels. Her current literary focus is Route 66 as it traverses California’s Mojave Desert. Madeline is a lifetime lover of mysteries, and besides reading and writing, is also a potter. She lives with her husband and assorted canines in the High Desert. Visit her Her Amazon Page 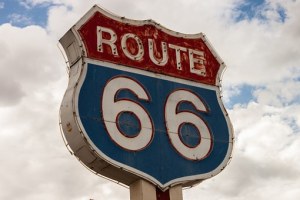