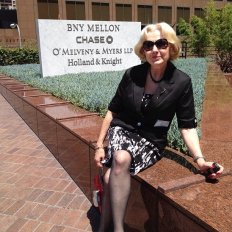 A former private detective and once a reporter for a small weekly newspaper, Gayle Bartos-Pool (G.B. Pool) writes the Johnny Casino Casebook Series and the Gin Caulfield P.I. Mysteries. She also wrote the SPYGAME Trilogy: The Odd Man, Dry Bones, and Star Power; Caverns, Eddie Buick’s Last Case, The Santa Claus Singer, Bearnard’s Christmas and The Santa Claus Machine. She teaches writing classes: “The Anatomy of a Short Story” (which is also in workbook form), “How to Write Convincing Dialogue” and “How to Write a Killer Opening.” Website: http://www.gbpool.com.

Beginnings, Middles, and Endings… A Thought or Two

When I start writing a story I usually don’t have the entire story blocked out in my head. Sometimes I have a beginning and an end. That’s the best way because I know how the story opens and blessedly where the story is going to end. Usually I have at least a sentence or a paragraph that tells me what the story is supposed to be about. Sometimes I have a page or two of the gist that provides the flavor of the story. That tells me the sub-genre: a detective yarn, a lighthearted mystery, a darker tale, or maybe a holiday story because I write those, too.

If you ever come to my house you will see small notebooks all over the place that I can grab and jot down an idea if it drops out of the sky. And they do on occasion. My fellow author, Bonnie Schroeder, gave all us Writers-in-Residence ladies a notebook and pencil set for the shower that writes in the wet. What a concept. So I am covered wherever an idea strikes.

The all-important beginning sets that Tone for any piece of writing. This is when the reader bites off a chunk and chews it to see if they might like to stay around for the rest of the meal. When these ideas strike, they have to grab my imagination, too, or I’ll discard them and wait for another inspiration.

Sometimes the initial idea is a bit of business that sets up a crime. Once I know how it’s done, I have to see who does it. The all-important villain will be the second, if not the first, character I must get to know. Remember, the bad guy or gal is the reason the story is being written. If nothing bad happens, I won’t need my private detective or amateur sleuth or long arm of the law to solve the case.

The Plot might be something that I hear on television that sparks the idea. I seldom rip a headline off the front page because I can almost hear half of the writers out there in “Fiction Land” ripping it off their newspapers and I want to write something new. But I will take a headline and turn it upside down or inside out to get a story.

That’s the old “What if?” game. If there is a story about a politician killing his playmate on the nightly news, what if the playmate sets up the politician instead in the fictional take on that account? I did that in a story in From Light To Dark, a collection of short stories that run the gamut from lighthearted to down right evil.

Stories are everywhere. The writer just has to see the possibilities. But remember, as a writer, you control your world and you can twist the story into something unique if you try. Just try not to twist it into something that doesn’t make any sense. More and more TV shows are turning into pretzels that barely make sense. That’s why I read more books than watch television.

So now you have a great beginning and maybe you are lucky enough to have an ending in your head. As I said earlier, knowing the ending lets the writer know where he or she is going. You don’t want to wander. And this isn’t only for the writer’s sake. If the reader gets lost along the way, they might put the book down and never pick it up again.

Make the ending as stunning as the beginning. When you are having a great meal and the dessert is terrific, too, you know you have had an experience. When someone puts down your book or even finished your short story, you want them to feel satisfied. And you want them to come back for more.

In TV shows, I can usually guess whodunit in the first ten minutes. That’s because of the formula that shows use. Sometimes it’s the lousy actor who plays the part who just looks guilty. He read the script and knows he did it and it’s written all over his face. I hate that.

In a book, I seldom analyze the story as I am reading it to see if I can pick out the villain. I want to enjoy the story and know we’ll get to the end eventually. I never read the end ahead of time, either. I wouldn’t have dessert before the main course, so why soil the meal?

I like to read the set-up, watch for clues, and at the end I’ll go back over the story in my head and see where those clues were if I missed any of them. Good writers leave them in plain sight. Readers just don’t know they were clues. There is nothing better than to say, “Boy, there was that clue right there all the time.” I love that.

The only thing I can caution writers against is dropping the villain and the clues in at the end where the reader had no chance to pick them up. Not fair to the reader or to the story. You can do better.

Now how about the middle? There it sits. Is it a big, hulking middle that the reader has to push around the dance floor with no music or is it thin and bony with no rhythm at all? This middle section is where the reader learns all the little things that hold the story together. Some backstory and some character traits are sprinkled in along with the bulk of the plot. Whether it’s on the high-calorie side with lots of detail or maybe a diet plate with most of the fat is trimmed off, you have to make the middle tasty.

Editing happens here. Add a little to enhance the story. Cut some off to make the pages turn faster toward the climax. Sweeten it with some good dialogue. Add some choice settings to give it flavor.

Some writers over-write their work. They cut and paste so much that they lose the story completely with all the tape and staples and glue. If your story is ponderous you will lose readers faster than if it is short and sweet.

But don’t shortchange the reader either. They paid for a story, so tell them a story. Give them the details, not an encyclopedia. You want them to know the characters, but remember: some characters are only there for color or to give some vital information before going off stage. Have a few main characters, some minor ones, and everyone else is just there to set the stage.

This holds true for novels and short stories. I have read quite a few mystery novels that packed in so much extra stuff that I lost track of the plot. The characters might be fun and the banter clever, but that dead body lying in the living room still needs to be discovered along with his killer.

Tell me a story first. I’ll get to know the people along the way. Have a beginning that pulls me in. Have a middle that holds my interest. Have an ending that makes me glad I bought your book or read your short story. I’ll look for your books on the shelf again if you can do that.

12 thoughts on “Beginnings, Middles, and Endings”