I’ve been writing since I was a child. I started writing plays for our stuffed animals, then an ongoing story with two friends. When I had small children, I discovered I could make money writing freelance human interest stories for the two local newspapers.

My mind has always been filled with stories. It was several years after I started writing on a regular basis, that I realized I didn’t daydream about family members coming to harm anymore. My husband drove a semi-truck for thirty years of our marriage. Before I started writing, my mind would dredge up all these horrible things that happened to him each time he was out on the road. Once I started writing every day, those went away. I had put my imagination to better use.

My first book, let me rephrase that. The seventh book I wrote, was contracted by a small press. Yes, I didn’t sell my first attempt at writing a book. It took me 7 manuscripts before I had crafted a book that a publisher wanted.

I have always been interested in the Wallowa Nez Perce, the band of American Indian that summered and wintered in the county where I grew up. We had a rodeo each summer named after Chief Joseph, but that was the only time I ever saw a Native American in the county. Other than the ghost of a warrior I saw one day while riding my horse on the mountain behind our house.

My inquisitiveness started me digging into their history when agents at a writer’s conference said they were looking for historical paranormal. I came up with my Spirit Trilogy. Three siblings of a northern band of Nez Perce with blonde hair and blue eyes that turned red with their emotions (my research discovered this northern band), who had become spirits. They are shapeshifters. Through them, I showed the history of the Wallowa Nimiipuu, as they call themselves.

Historical Western Romance seemed to be taking a hit and not selling well. I was complaining about it at a Romance Writers of America meeting and one of the other authors said, then write contemporary western. I said I didn’t think I could. Lo and behold, on the two hour drive home from the meeting, a radio show host talked about how kids had used their parents’ credit card to order items on the internet. And Poof! I had an idea for a book. That was Perfectly Good Nanny which won an EPPIE award for Best Contemporary Romance in 2008. I wrote another contemporary western romance, Bridled Heart. They are both stand alone romances.

Wanting to write Action Adventure, I wrote the Isabella Mumphrey Adventures. She is a cross between Indiana Jones and MacGyver. The first book, Secrets of a Mayan Moon, she is in the Guatemalan Jungle. I became friends with a Guatemalan blogger who helped me make sure the book sounded authentic. I LOVED writing this character. She had three books. Then, again, even though the first book won the Reader’s Crown in 2013, the books are slow selling.

Mail Order Bride books became popular, but I thought they had been done over and over, so I came up with a sort of mail order husband series. Letters of Fate. In these historical western romance books, the hero receives a letter that changes his path and leads him to the woman he marries.

Ditto my Silver Dollar Saloon series. These are historical western romance, where the heroines are women who are taken in by the saloon owner when they are found starving, sick, or beaten. As they heal both in body and in mind, they find they can love and be loved again. They are redemption stories.

I finally felt confident enough to go back to writing mystery books in 2014. I wrote the first three Shandra Higheagle Mystery books and released them three months in a row in 2015. I love writing what I had always wanted to write, and I love that readers are enjoying the books. Shandra is a Native American potter. She is only half Nez Perce and wasn’t raised knowing her father’s heritage. This aspect made me feel confident I could write her because I could discover more about her family right alongside of her as I wrote her books. I have a friend who lives on the Colville Reservation where Shandra’s family lives. Number 14 in this series just released. It is set in Kaua’i Hawaii. I vacationed there last year and used it as a setting.

The other mystery series, is the Gabriel Hawke Novels. Hawke is from the Umatilla Reservation in Oregon. He joined the military, came home, and became an Oregon State Trooper. Fifteen years ago, he became a fish and wildlife officer with the Oregon State Police in Wallowa County. Remember that place from earlier in my post? I grew up in Wallowa County, I love the rugged, ruralness of it for a mystery series. And what better character to solve mysteries than a master tracker, with roots in the area. His forefathers summered and wintered in the valleys and the mountains.  He is not only protecting the animals and land for the law but for his ancestors. To be sure I had this character’s occupation written correctly, I rode with a Fish and Wildlife State Trooper in the county for a day. He gave me a notebook full of information and ideas for stories. I’m currently writing book 5 in this series. It is set in Iceland, a place I visited last year. When I discovered they held a large SAR (Search and Rescue) conference every other year, I knew I had to bring Hawke to Iceland.

As you can see, I tend to write what is strongest in my mind. And if they don’t sell, well, then I move on to something else. Right now, the mysteries are doing much better than the romance. My calendar for 2020 is to write only mysteries. 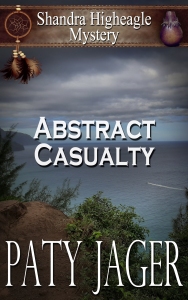 Shandra Higheagle is asked to juror an art exhibition on the island of Kauai, Hawaii.

After an altercation at the exhibition, the chairwoman of the event, Shandra’s friend, arrives home with torn clothes, scratches, and stating she tried to save an angry artist who fell over a cliff. Shandra and Ryan begin piecing together information to figure out if the friend did try to save the artist or helped him over the edge.

During the investigation, Shandra comes across a person who reminds her of an unhealthy time in her past. Knowing this man and the one from her past, she is determined to find his connection to the dead artist.  When her grandmother doesn’t come to her in dreams, Shandra wonders if her past is blinding her from the truth. 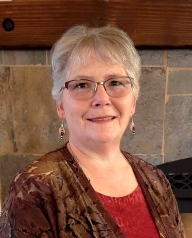 Paty Jager is an award-winning author of 43 novels, 8 novellas, and numerous anthologies of murder mystery and western romance. All her work has Western or Native American elements in them along with hints of humor and engaging characters. Paty and her husband raise alfalfa hay in rural eastern Oregon. Riding horses and battling rattlesnakes, she not only writes the western lifestyle, she lives it.

Jackie: To read my review of the first Gabriel Hawke mystery, see – Murder of Ravens