I’ve been thinking a great deal about words lately. Part of the reason is that I recently pitched a story I’d written almost two decades ago to a producer who’s shown some interest in the project. It contains language that would be inappropriate for this blog, but while the comic murder mystery at the heart of the story is meant to entertain, its satirical backdrop illustrates society’s relationship with certain words over the last half-century.

Anyone who’s lived more than a few decades has seen a loosening of standards in the media as well as in general life. While this blog – and  I suspect some of you – may eschew using certain words, I’ll bet your standards have changed along with the rest of our world. I’ve seen words in newspaper articles I’d never expect to see in print. I rarely watch TV except when I travel, but even with my limited exposure I’ve heard language in television programs – and I’m talking network TV, not cable – that wouldn’t have been permitted in the past.

Do you recall George Carlin’s Seven Words you can’t say on TV? Lately a few have slipped by. I recently heard a TV news anchor say a word I never expected to hear, having to do with bovine excrement, without a peep from the network or FCC. One of the Democratic candidates uttered another Carlin no-no during the first debate. A few words are still off-limits, and by my account we’ve added a new one to the list (hint: it starts with an N).

I’m not only thinking about obscenities. I’ve also noticed how many ‘ordinary’ words have been redefined or had their meaning augmented. Take the word average. It’s a mathematical term, yet it’s taken on social connotations. We hear about the average person and equate it with falling straight down the middle of a ranking system, not being good or bad. No one aspires to be average anymore; it has become something to avoid, either as a person or as an opinion.

As a writer, I find I must be more precise in my usage of certain words because of this. It concerns me that something I say or write could be misinterpreted. As a former journalist, my goals in reporting were ABC: Accuracy, Brevity, Clarity. Let’s not get into accuracy in news. Brevity translates into sound bites – catch phrases and such, or interrupting a speaker who takes more than a microsecond to get a point across. These days Clarity must include weighing a word’s intended meaning against what it’s perceived to mean. Social shifts, political correctness, and cultural rebranding have all contributed to this landscape, opening up new possibilities for writers as well as new dangers.

On occasion I’ve read lines of writing that could be misinterpreted. In each case I had close ties to the author, so I knew better than to take offense at what they wrote. However, readers who lack that personal advantage might not see it that way. I also worry a great deal about doing that myself and have on more than one occasion censored my work rather than risk the possibility of having someone take my words to mean something I never intended.

Have you thought about this as well? Are you concerned with the possibility that something you’ve written could be taken as insulting or offensive even if that wasn’t your intent?

THE DOG ATE MY . . . [FILL IN THE BLANK]
Novelist Bonnie Schroeder shares some of her favorite excuses for not writing. Visit her Author’s Page on Amazon. 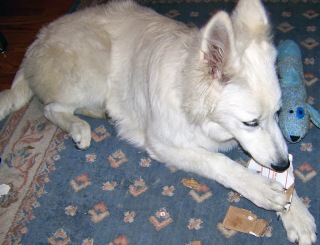 Meet Thunder, the newest addition to my family. She is a Swiss shepherd, close cousin of the German shepherd. She blasted into my life on November 1, 2014. As it happened, I was working on the final act of my new novel, and I was stuck. I didn’t have a satisfactory, or satisfying, ending.
So I shoved the manuscript aside, having been handed the best excuse in the world: I had a new puppy. Housebreaking. Crate training. Socializing. Bonding. And generally enjoying the fun, excitement and disruption a new baby, human or animal, introduces to one’s life.
The trouble was, three months later I hadn’t picked up the threads of my novel, and by then Thunder had fairly well merged into the household routine. But, somehow, I still “didn’t have time” to work on my novel.
Normally, I am pretty adept at squeezing maximum usage out of my time. I wrote the first few drafts of Mending Dreams while working ten-hour days with an hour-long commute tacked on both ends of the workday.
So what was up? I avoided thinking about it as we started obedience school and I focused on training my puppy. Thunder, however, did some teaching of her own. Among other things, she made me realize I needed to curb my perfectionist tendencies. A six-month-old puppy will not and should not become an obedience champion overnight. She’s a work in progress.
That got me to thinking about my unfinished manuscript, and—duh! I finally figured it out. I did not have the perfect ending for the book. I was stumped. It wasn’t lack of time that kept me from working; it was lack of direction.
Somewhere along the line I’d forgotten a crucial fact about being a writer: you can’t fix what isn’t on the page. I’ve made enough false starts over the years that this lesson should have been permanently engraved in my brain. But it wasn’t.
So I took a deep breath and dived into the chilly waters of revision, crafting a new ending, better than the one that had left me stuck. Well, maybe “better” is an overstatement. It was different.
And something very weird happened, although I should have seen it coming. As I typed up my hand-scribbled draft, ideas began to float around in my brain. Hey, maybe instead of ABC, let’s try XYZ. Yeah, not bad. But maybe MNOPQ would make more sense? Try it. And try again, until you have something that kinda sorta approximates the vision in your head.
That’s how I did it, bit by bit, while Thunder was taking naps. Puppies sleep a lot, so I had many half-hours and hours to do what I thought I “didn’t have time” for.
Another thing Thunder taught me is that imperfections aren’t fatal. My puppy was born with a stubby tail, which some might consider a flaw. But to me she’s unique and special, and that little metronome tail is always wagging. Likewise, no piece of writing is perfect, and often it’s the flaws that give it depth and worth.

Thunder is flunking novice obedience—well, I’m flunking, and I’m taking her with me, but we’re learning a little. Next time around, or the time after that, we’ll do better. But if we didn’t start somewhere. . . Well, you know how it goes.
As I worked through all this angst, I came face to face with some truths about myself: I’m lazy. I like excuses. But underneath all that, writing is in my DNA. I may not be the world’s best dog trainer, but I am nothing if not persistent (some would say “stubborn”.) And, most important, I am a writer, and always will be.
So let me ask: what’s yourfavorite excuse for avoiding stumbling blocks in your writing? And how did you overcome it?
Follow The Writers in Residence on WordPress.com