(**See disclaimer at the end)

Ahoy there Maties! Have ye sailed the Seven Seas yet?  What’s stoppin’ ye?  Oh… murder!  That!

In January my Hubby and I went on the most amazing 15-day cruise from Florida to Los Angeles by way of the Panama Canal.

What made it amazing?

The Canal transit, of course!! (#1 on Hubby’s bucket list), But the perfect sunny weather, the deep blue sea(s), the small, uncrowded ship (just 670 passengers), the funny and very personable Captain, the amenities (food, lounges,  gorgeous library, spa, pool, Internet café, crafts & games, casino, theater), our beautiful cabin with a balcony (oh, the views!), breakfast in bed, the lack of crowds and lines, the cool excursions in Aruba, Costa Rica, and Chiapas and Cabo San Lucas in Mexico were all definitely fantastic.

If EVER you go on a sea cruise, be sure to book passage on a small ship (unless you have kids). The Princess line has only one, and the Oceania Line has just three. And yes, they can and do travel around the world in 111-195 days. (I’m still dreaming of that!)

Imagine, if you will, 4-6 months in luxury, with everything taken care of for you, the occasional excursion ashore, time spent in one of several lounges or the library or your room, even out on the balcony with a laptop, with a bunch of characters eager to do malice, and a twisted mystery plot to direct them!

Yep, I could write a book on a World Cruise.*  (sigh)  Oh, yeah, writing and books, that’s what this blog is about…

Since we’ve come home, I have noticed the abundance of mysteries aboard ships.  There are the dark ones like The Poseidon Adventure by Paul Gallico, Dangerous Crossing by Rachel Rhys, The Woman in Cabin 10 by Ruth Ware, Birds of Pray by J.A. Jance, and Death on The Nile by Agatha Christie.  (Perhaps you’ve read a few.)

On Goodreads, there is a list of 47 Cruise Ship mysteries/adventures for Young Adults and Kids, including some with the new Nancy Drew and Hardy Boys, and the Boxcar Kids.

And of course, the cozy and humorous mysteries; Killer Cruise by Laura Levine, Cruising for Love by Tami Cowden, Princess Charming by Jane Haller, and Murder on the Oceana by Elizabeth Martin.  Whew!!  With all that written murder, mystery, and danger, I can see why you might be hesitant to walk up a ship’s gangway. 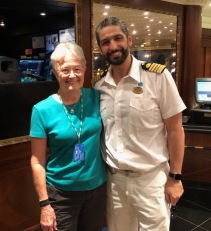 But what about on OUR cruise ship, the Pacific Princess?  I asked the Capitan Paolo Ariggo several questions during our two weeks, but one of them was about this topic.

“I’m a part-time mystery writer, and I want to know, does the ship have a morgue and a brig?”

He grinned and in a very soft voice said, “Ahhh, yes. There are two refrigerators that could be used for that…” then in a normal voice, “but a brig, what is this?”

“No-o-o,” he said with that Italian accent and a quick shake of his head.

“So where would you keep a prisoner until the ship docks?”

Silence, then, with a laugh, “In the Captain’s quarters!”

The seasoned passengers were more forthright. One related this story.

“On the world cruise we took two years ago, there was a murder. Late one night on the pool deck (#10), a man and a woman, obviously drinking, had a loud argument. The man (he was quite large) back-handed the woman.  She fell to the deck and lay still.  He thought she was dead! (she wasn’t). So he picked her up and threw her overboard.  BUT she landed on top of one of the life boats. She did die that time.  They found her body the next day.

“They searched the ship. Everyone was called to their muster stations.  We had to wait there until he was found. It was two hours!  And when we docked in Aruba no one was allowed off the ship until the police had come and taken him away.”

Another told of a husband being poisoned to death. They thought it was the wife.

I bet you writers are thinking of possible crimes now that could be set aboard a cruise ship. What would be YOUR angle?  How would it happen? Would it lead to other murders? Would a passenger become the sleuth, or would there be a retired/recovering detective aboard? And… who would be the killer?

Right now, I’m reading an ARC (Advanced Reader’s Copy) of a cozy mystery for review, Bonbon Voyage by Katherine H. Brown about the Chef being murdered. (Oh, no!!)

And I’ve recently reviewed Death on the Danube by Jennifer S. Alderson which you can read here.  Review on my Here’s How It Happened blog This one was a river cruise.

After the BonBon book, I’m looking forward to reading The Cunning Cruise Ship Caper by Sally Carpenter, and the humorous “geezer-lit” mystery,  Cruising in Your Eighties is Murder by Mike Befeler.

How about you? What is on your TBR pile? Have you got a mystery or memoir set on a cruise ship?  Or… perhaps you know a dark true tale that could be made into a short story or book?

Well, dive right in!  Launch that story! All aboard!

(Disclaimer: First of all, this seems like a very untimely post. I am so sorry about the unfortunate cruise ship in Asia and the number of sick people on it. I pray all those among the 3,500 passengers plus crew will recover soon. But please don’t let that stop you from an ocean voyage in the future!)

*A 111-day cruise on the Pacific Princes in a balcony cabin like ours begins at $60,000 double-occupancy.

First, I am a believer in Jesus Christ, so my views and opinions are filtered through what God's Word says and I believe. I'm a wife, a mom, a grandma and now a great grandma. I write articles and reviews, and I dabble in short fiction. I enjoy living near the ocean, doing gardening (for beauty and food) and traveling - in other countries, if possible. My heart is for Christian missions, and I'm compiling a collections of Missionary Kids' stories to publish. (I also like kittens and cats and reading mysteries.) View all posts by photojaq

13 thoughts on “Cruises Can Be Murder**”