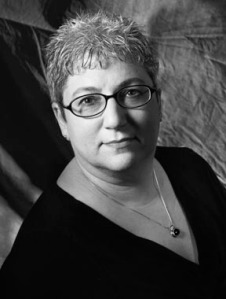 Today, we are pleased to present an interview with Jeri Westerson. A Southern California resident, Jeri has been a freelance reporter and has written award-winning short stories, some of which can be found on her website. Besides being a wife, a mother and an artist, Jeri is the author of the Crispin Guest Medieval Noir series. Crispin debuted last year in the hardcover mystery “Veil of Lies“, available in bookstores and on Kindle. “Veil of Lies” was recently nominated for a Macavity Award for Best Historical Mystery and the Shamus Award for Best First PI Novel. GB Pool’s review of “Veil” follows this post. Her second Crispin Guest mystery is “Serpent in the Thorns.”
Without further ado, Jeri Westerson.

“Serpent in the Thorns” is the second book in your Medieval Noir series. Most people think of Los Angeles when they think noir. What attracted you to 14th century London?

I am an L.A. native, as it happens, growing up on the “mean streets.” But I am of the mind that any place can have its noir-ish qualities. There are dark mysteries set in Detroit, Philadelphia, Chicago. But aside from geography, I think noir is more of a state of mind. It’s the dark places in one’s soul; the depressed lives of those who move through the underbelly of society. And that can be anywhere, from Chandler’s Los Angeles of the thirties to the muddy streets of fourteenth century London.
>
When I set out to write my own style of medieval mystery, I didn’t want to write the same thing that I saw on bookshelves. They say you should write what you can’t find out there to read, and so when the idea of creating a hard-boiled detective set in the Middle Ages came to me, it seemed a natural fit with the time period. When you concentrate more on the people of the streets rather than the velvet-gowned nobility, you have the makings of noir. 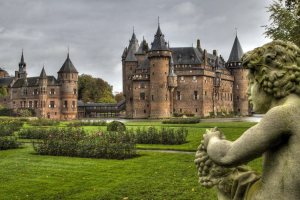 Fourteenth century London offered a great deal to write about for a disgraced knight who found himself trying to eke out a living as close to what he was used to doing as he could get, valiantly maintaining his chivalric code. In 1384, when the series begins, we have just come off of the Black Death some forty years prior. This is a dark chapter in Europe’s history where a third of the population was wiped out. Imagine, a third of farmers, craftsmen, nobility—all gone. That took a toll on commerce, making food, goods, and services scarce. Superstition, crime, corruption, the Hundred Years War—all good stuff! But on a happier note, it is also the time of Chaucer, when English was becoming the language not only of the people but of the court. It also begins the promising reign of Richard II only to have that reign end in tragedy. It’s rife with noir opportunities!

The Boston Globe described your protagonist Crispin Guest as a medieval Sam Spade. He’s a disgraced knight turned private investigator. We’ve seen disgraced cops before. What additional implications are there for a disgraced knight?

There is a lot in common with the cop who has to leave his badge behind, but also some differences. Crispin not only lost his knighthood, his lands, and his wealth, but taken all together, these were the very things that defined him. So it’s not just about losing one’s job as a cop. Crispin has no place in the world. All his life he was raised to a certain position, a certain expectation in a society in which everyone’s place was rigidly defined. To have been tossed out of his place—not allowed to even be succored by relatives—was the ultimate dehumanization of a person like him. Family and lineage was important to every aspect of society, but now Crispin had nothing of a legacy to leave behind. In a sense, he has no name.
But even though he was no longer allowed to be a knight with all the trappings, he can’t let go of the chivalric culture he was raised in. Crispin is a classicist and a snob. He contends that his nobility is “in the blood” and even though his rank has changed, he finds it impossible to overcome that which was ingrained in him, even to his detriment.

I thought it incredibly clever that you gave Crispin his own blog. What are some of the pluses and minuses of posting from your character’s point of view?
The pluses are that readers get to know Crispin more deeply. I write the blog in first person, but the books are in third. It actually gives me a deeper insight into the character when I have to think in first person.
The downside is that I have to be careful not to give away plot or get ahead of the current book (I’ve actually already written the first four in the series, but we’ve only got the first two released or soon to be released).
I only post once a month because I want to save something for the novels. It’s only supposed to serve as a bridge between books, just to keep in touch with Crispin in a new and sort of interactive way. Some people have left comments but not many. I don’t know if they realize that Crispin will reply.

Reviewers praise your attention to detail and your ability to bring medieval England to life. What are some of the strangest facts you’ve run into while researching your time period?

There is the odd fact that an inordinate amount of men in London met their doom by falling out of windows. That in and of itself isn’t much, but it was how they fell out that was the most interesting part. It seems that waking up in the middle of the night, probably groggy from too much drink, men were too lazy or thought it too hazardous to relieve a call of nature by climbing down rickety ladders and stairs to use the privy outside. So they’d open the shutters (remember, no glass), positioned themselves accordingly, and…well…misjudge. Talk about getting caught with your pants down!

With so much detail, do you write your first drafts and then fill in the research details later? Or do you research as you write?

I usually take a solid month or two before I begin to write to do some detailed research. I already have a lot under my belt to get me going. These new details usually involve real people I plan to write about, or occupations I haven’t researched in depth before. Then, as I write, if I come across something I need to research, I usually stop and research right then and there. The problem with just passing over it to look it up later is that sometimes what you thought and what you discover are two entirely different things and the new information could end up radically changing the plot! So I find it’s just better to stop and find out right away. Sometimes it gives me more insight into some other aspect of the plot I hadn’t thought of before, so it’s always valuable.

Do you have any advice for aspiring historical novelists?

Well, there is a difference between the historical novel and historical mystery. The latter is a much wider market (which was why I switched from writing straight historicals to mysteries). I think it might be easier to get published in the latter, but mysteries come with their own set of problems. For one, mysteries pretty much demand a series with the same characters. There are exceptions but I wouldn’t count on those. Writing a series character was a new experience for me. I was writing and trying to sell stand-alone historical novels for well over a decade before I switched gears and worked on developing my mystery series. I couldn’t get arrested let alone published with my historicals (the historical market is very tough. Currently, editors seem to want female protagonists. And the Tudor era is golden.)
My best advice is to write what you love. Write what you can’t find out there to read. And keep on writing.

Can you tell us what’s next for you?

Crispin will return in his third adventure in 2010 (I’ve signed a contract for books three and four and I’m currently working on books five and then six). The third in the series is called A CONSPIRACY OF PARCHMENT and pits Crispin against a child killer and a mysterious creature that might be a Golem.
And then I am also working on a second medieval mystery series. It’s in the thinking stages right now but promises also to be another subgenre of medieval mysteries, something a little lighter in tone.

here .
You can find “Serpent in the Thorns” at bookstores or by clicking on the book cover.
Follow The Writers in Residence on WordPress.com