MY SUPERPOWER: PERSISTENCE by BONNIE SCHROEDER

Bonnie Schroeder started telling stories in the Fifth Grade and never stopped. After escaping from the business world, she began writing full-time and has authored novels, short stories and screenplays, as well as non-fiction articles and a newsletter for an American Red Cross chapter.

I come from a family of quitters. Sort of.

Several generations ago, my family owned a farm in northern New Mexico, in the Four Corners area. Now, anyone who’s ever lived on a farm knows it’s hard work. There are no vacations, holidays, or sick leave. It’s dangerous work, and you’re always at the mercy of Mother Nature.

So it’s totally understandable that at some point they gave up, sold the farm, and moved on to something less overwhelming. However, the people who bought the family farm went on to discover oil there. And I’m sure my great-grandparents sometimes thought, “If only we hadn’t given up.”

I heard that story from the time I was a little kid, and it haunted me. So when I became a writer, I swore I would never give up or give in to discouragement. I would become a published writer.

Life intervened in unexpected ways, and I had to put my dreams on the back burner for a while, but I never abandoned them. I kept writing, if only in stolen moments on a commuter van traveling to and from my job.

Writing is hard work, and you often must sacrifice other pursuits, many of which are easier and more entertaining. Your friends look at you funny when you tell them you’re skipping the movie so you can work on your novel. Sometimes I’d wonder, “Is it worth it? Who will care about this book anyway?” The answer, of course, was “I will.”

I finally finished a novel, and I even found an agent. Yay! Mission accomplished!

Ooops, not really. My agent was very determined; she got me rejected by all the big publishing houses, until a junior editor at the now-defunct Zebra Books took a liking to the novel. We talked, she suggested a few changes, and I was almost done revising when my agent called. The junior editor’s boss overruled her. No publishing deal.

My agent briskly told me to write another novel— “a mystery this time.” I did. She read it and dismissed it, telling me “that theme isn’t selling right now.” And she gave up on me.

But I didn’t give up. I wrote another novel, and after years of workshops and revisions, I began sending it to agents and to publishers who took unagented work.

I sent 167 query letters over six years before luck landed me at Champlain Avenue Books (well, luck and my friend MM Gornell, a fellow member of this blog.) And after all that time and all that angst, before I could even catch my breath, Mending Dreams came into being—and into bookstores. 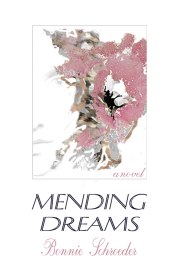 I was tempted a lot of times to give up, but that family story stuck with me, and I didn’t want to be the one who walked away and let someone else reap the benefits.

You hear all kinds of slogans on this subject: “Winners never quit; quitters never win.” But in my case the slogan took tangible form, and I’m here to tell you that you CAN achieve your dreams, if only you keep trying. Sometimes just hanging on for that extra day, that extra mile, that extra page—it can make all the difference.

I’m putting my words to the test again, working on a new novel—the most challenging one yet. But it’s easier to keep going now, because I know I can do it, and I know that I have to.

Have you ever been tempted to quit writing because it can be so hard and sometimes so discouraging? Did you persist? How did you motivate yourself to keep going?

Join 480 other subscribers
Follow The Writers in Residence on WordPress.com