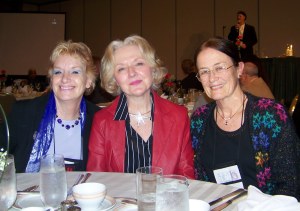 This year, Left Coast Crime was held in Los Angeles, and three of our WinRs attended

Here’s what they had to say about the good, the bad, and the nefarious!

I loved riding up and down on the historic Angel’s Flight funicular at Michael Connelly’s luncheon!

But I also thoroughly enjoyed meeting such an assortment of other writers from all over the world. Wherever they had come from (England, Canada, New York and further afield) we all had a common bond: a love of writing and mysteries – in varying degrees of immersion. From the ex-soldier, retired cop from Yorkshire (Colin Campbell) who was working during the Yorkshire Ripper’s reign of terror – to the elegant New Jersey writer, Sheila York, who seems to channel Raymond Chandler via Lauren Bacall for her 1940s sleuth Lauren Atwill. And, of course, our forensic champ Doug Lyle was there guiding us through fascinating ways for our villains to kill people and almost get away with it. My head is still buzzing with all the new writers I discovered and the voices of characters yet to be written.

I can’t wait for the next conference.

Left Coast Crime left me breathless, speechless, and tired. Getting downtown in early morning traffic in Los Angeles had me white-knuckled, but the hotel staff was very accommodating and I liked the venue. (Note: The Omni Hotel downtown LA)
What I liked most was seeing people I actually know, many of them friends, and meeting some really great mystery fans. They were so much fun to talk to – all of them. And then I got to be on a panel (The Art of the Short Story). I will never forget that.
I picked a variety of panels to watch, tending more toward the darker ones since my own work is less cozy and more the traditional gumshoe variety. I had heard many of these authors before, but there were still some fun stories, and a few surprises. 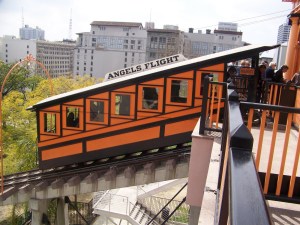 There was always something to do. I loved riding Angels Flight, the shortest railroad in the world, for its first run since 2001. Author Michael Connelly helped facilitate that experience.
The biggest disappointment was listening to Lee Child expounding on some half-baked idea that we all came from sea creatures living in salt water. Since no one was laughing, I guess it wasn’t a joke, and the guy believed what he was saying.
One rule people should have in polite society: No Religion/No Politics. A half dozen people on various panels talked about Dick Cheney. He was mentioned more than any other single person. Go figure.
I went to the bar and had a martini and thought about what I would like to say to Dick Cheney if I ever met him.

Cozies, humor, geezer lit: are these (dare I say, “frothy?”) mystery sub-genres going out of style? According to the panels I attended at the recent Left Coast Crime convention, the answer is a resounding “No!” 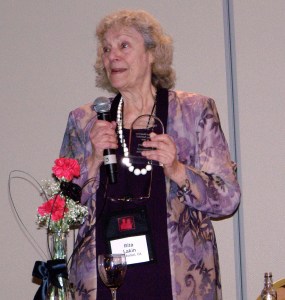 LCC even awarded the prestigious “Lefty” to Rita Lakin (70+) for her “Geezer Lit” mystery series with a sassy (and funny) 75-year old protagonist. Go Grandma!

Look at some of the panel titles offered: “Bring Your Blankie, Let’s Get Cozy!” “Die Laughing,” “Cozy Up,” “Geezer Lit,” “Thrilling Cozies,” “LOL,” and “Liars.”

Sure there were “hard boiled” panels, noirs, and true crime (and of course talks and interviews by stellar crime-fiction authors), but I was there for a light-hearted good time.

Earline Fowler (Benni Harper series) is one of my favorites. She’s been writing good, clean, heartwarming, (and yes, suspenseful) mysteries for 17 years. She writes a book every 18 months, and says “You can push back a little” if you don’t like your publisher’s demands. (Oh, ho!)

Another of my favorites, Parnell Hall (Puzzle Lady series), got laughs simply by walking into a room. (No wonder they chose him for Guest of Honor at Malice Domestic!) And then there was Mike Befeler (Retirement series) whose “Geezer Lit” hat soon became recognizable everywhere in the hotel.

Annette Mahon (Quilting Bee series) writes about a group of elderly ladies who meet at church to stitch and solve mysteries. Cynthia Riggs published her first book at age 70. Her protagonist was 92. She hopes to keep her going to 99 and beyond!

Older, funny, “delicate but dangerous” protagonists are alive and well. Long may they live!

PS: From the silent and live auctions, over $7,000 was raised for the Los Angeles Public Library Adult Literacy Program, and over $7,500 for the Crime Lab Project. Way to go Left Coast Crime!!