Skip to content
The question this week for our WinR’s and readers is: How much do real world events–from natural disasters to political fiascos–impact your writing?

The “real world” has a lot to do with the kind of writing I do, in fact my web site is titled “News & Reviews.” But I tend to go for the softer sort of news, i.e. art gallery openings, classic car shows, author panels at our local library, and interviews with interesting business and career people.

Yep, you got it! I’m a chicken. The two or three investigative stories I’ve written – while providing good “press” – resulted in some nasty backlash for me and even a few threats. Yikes!

I did learn two things however. Confirm EVERY detail you get from your sources no matter how reliable they are, and be sure to cover BOTH sides of the issue thoroughly. Then take your punches like a … woman. (Oh, and be sure your editor doesn’t add his two – unconfirmed – cents to your article!!)

Politics? I avoid discussing them like the plague. Of course when controversial issues appear in the books or plays I review, I address them, but it’s in the context of the story presented. My personal convictions do occasionally leak through, however.

I write more about human-instigated disasters than those presented by nature (God). I interviewed an elderly shop keeper once who had been robbed and beaten by a gang of punk kids for the few bucks in the till. Terrified by the incident, he decided to close the small neighborhood market. You see, he knew the boys; had watched them grow up.

I also chronicled the burglary of a local Catholic Church, where the thieves walked off with the entire safe. The Priest’s pleas that the safe or at least the communion instruments inside it be returned went unheeded even though he promised “no questions asked.”

Another story was about a woman who was injured by an inattentive mechanic while having her car repaired. The owners and employees conspired to make her look the fool. Thank God for a part-time worker in a neighboring business who was willing to come forward.

These are the things that “get my dander up.” But I just report on them. If ever I were to write fiction, the sense of injustice I feel when interviewing these victims would assure a very nasty “reward” for my antagonist. Take that, you scumbag

The biggest effect real world events have on my writing is as a sometimes unwelcome distraction. Bad news scares away my muse, so I try not to read the paper or turn on the radio until I’ve done my morning’s writing (easier said than done). It’s hard to write if you’re worried about some unfriendly country launching a nuclear warhead at us. And politics is endlessly fascinating but more of a time-waster than a useful tool for the type of fiction I write.

I have used an occasional local story in my fiction. Key scenes in my recent novel take place during one of Southern California’s notorious October wildfires, the Santa Anas roaring 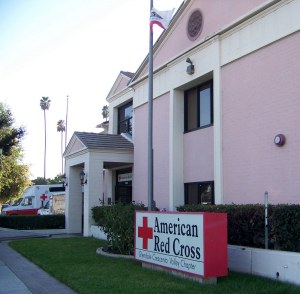 in the background. And I keep a clip file of events that might sometime pop up in a story – a murder or a particularly flagrant white collar criminal, usually. I keep trying to find an irresistible heart-warmer to use, but so far that hasn’t happened.

Since I also publish an online newsletter for the local Red Cross, disasters do have a direct and immediate impact on that side of my writing. Our chapter deploys volunteers to national events like last year’s Gulf Coast hurricanes, and they also come out for local disasters like brush fires or even single-residence fires, to support the victims and the responders. I’m always attuned to news reports because if our chapter volunteers are deployed, I need to know and to report it to our readers.

As far as story line, real world events don’t really impact my mysteries or children’s books. However, I can’t resist some commentary.

I wrote “Logical Larry” (an early-middle reader) out of disgust for the way children are targeted, whether it’s by commercials luring them with “must have” toys or a rogue teacher forcing young elementary students to wear pink shirts to support the union’s opposition to pink slips, threatening them with “NO PLAYTIME”. Larry attempts to teach children to think for themselves. They need to learn to question things at an early age.

In my mysteries, characters may make comments that address issues rather than actual events, such as when Deanna Wilder, feeling left out, considers calling herself a Euro-American.

Events tend to come out more in my blog, God’s Teeth. This is where I raise issues that drive me nuts and find a way to make them a useful writing exercise. The difficulty is how to make the point without being flat-out mean.

Real life incidents are a great jumping off point for many of my stories. My first novel, Media Justice, was a conglomeration of all the wall-to-wall news accounts of every “trial of the century” last century. It was that super saturation of media frenzy and instant experts that seemed to come out of the woodwork that made for a compelling story.

But I prefer to pick my own villain rather than use the one in those headlines. It makes it far more interesting to develop the character when I can create their personalities. It is the essence I am looking for, not the facts from any particular case.

And what is even more fun is to take a well-worn news story, one of those that the media beats to death, and rework it so the bad guy ends up the victim and the original victim turns out to be the villain. It makes the story fresh and it keeps the reader guessing. Fact is great, but fiction is better. (Sometimes.)

I do have a spy trilogy, as yet unpublished, that follows my father’s military career and actual historical events. Most of the events I depict, at least from my father’s POV, are fictional, but there are many things I don’t know about his career. He was cleared to Top Secret, was a command pilot in the Air Force, and he didn’t talk much about his exploits. He did read the first draft of the first book. He sent me a letter and mentioned a few things that I got wrong. And here I thought I just had a great imagination.

But history and the headlines are a great source of ideas for any writer. I just prefer to rewrite aspects of it for a story. I don’t want to misrepresent history. That happens enough without my help. But I do like to flavor stories with real things so the reader doesn’t know where the facts end and the fiction begins.

One thought on “Ripped From the Headlines!”