The Alameda Writers Group, aka AWG, went dark this year after a long and productive run as one of the premier writers’ support groups in the Los Angeles area. 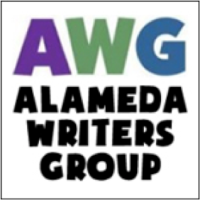 I was a member for many years, and only now that it’s gone do I fully appreciate the benefits I derived from AWG.
At the General Membership Meetings I heard speakers like acclaimed novelist Diana Wagman, as well as writers from TV series like “Rome” and “True Blood” and had a chance to tell them in person how much I enjoyed their work. Some speakers discussed their craft and others told encouraging stories about their long and winding roads to publication/production.
It was a priceless networking tool, and I owe many of my friendships—including those of ALL the Writers in Residence—to the AWG, either directly or indirectly.
The relationships I formed through AWG were instrumental in my producing a published novel, thanks to the critique groups I joined. In them, I experienced the “tough love” that only fellow writers can provide: honest but compassionate feedback on what worked in my writing, and what didn’t. I heeded their comments, went back to my novel-in-progress and reshaped it until it did (mostly) work.

One of my peak AWG experiences, in fact, came when I joined fellow novelist Heather Ames (whom I met in those critique groups, one of which she moderated) to address the membership and describe our paths to publication.
Why am I going on and on about a now-defunct organization? Partly it’s guilt. AWG began to founder, and I did nothing to prevent it, so this post is a big mea culpa. When new leadership made some missteps, and many of the members felt the organization began to drift off-course, all I did was gripe about how AWG had lost touch with fiction writers. Some of my colleagues did try to intervene, but they were rebuffed, and I used that as an excuse for inaction.
Membership dwindled. New leaders came on board and tried to redirect and re-energize the group, but the damage had been done. Finally, the meeting venue closed down for renovation, and it became obvious that it was time to turn off the lights. All good things must come to an end and all that.
But I think it’s important to recognize the value of AWG, and I know that if I ever find another group like it, I will try to do more to keep it going. Good old hindsight.
When I joined AWG, I’d left a career in the business world and had a vague notion that I would devote myself full-time to writing. However, I wasn’t sure I had what it takes to be a “real” writer. Over time, I began to believe that I did have the makings of novelist, if I was willing to work at my craft and be open to feedback, and the result of all that was, among other things, Mending Dreams. I wrote my novel, and I found a publisher, and I honestly don’t know if that would have happened if I hadn’t joined AWG all those years ago.
And so, with apologies to Lerner & Loewe, “don’t let it be forgot, that once there was a spot. . .” where writers of all kinds were welcomed, acknowledged, encouraged, and given a chance to improve their craft.
For that, AWG, I thank you.