We hare pleased to welcome Alice Zogg, author of the R.A. Huber mystery series. Born and raised in Switzerland, Alice moved to New York City where she met her husband, Wilfried. Shortly after the birth of their first daughter, they relocated to Southern California in 1967 where they continue to enjoy life. I have a special spot in my writing heart for Alice, because she’s the first person I met when I wandered into my first Sisters in Crime meeting, and her warm and open demeaner definitely influenced my decision to join!

For starters, I’m really interested in your sleuth. Regula “R.A.” Huber is in her early sixties, which might put her outside the age range that publishers are looking for. Did you find you had trouble generating interest in a silver-haired sleuth?

R.A. Huber is not your average sixty-something woman. She is equally comfortable in a competitive game of racquet ball against younger men, on the dance floor, racing down a mountain on skis, dressed in a long gown at a black-tie function, or simply enjoying a game of chess. What makes her unique, though, is how she chooses to spend her golden years. Unlike most of her contemporaries who pursue hobbies or join clubs after retirement, Huber opens a private investigating business.

In your fifth book,” The Fall of Optimum House”, you introduced a sidekick. What made you give R.A. someone to work with? 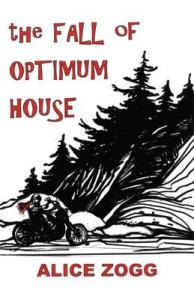 After having read my third book, a retired editor who is my mentor suggested that Huber might benefit from a sidekick. At the time I was deep into writing my fourth, The Lonesome Autocrat, which is set in Switzerland. It would have been unrealistic to add a sidekick to that particular story – – at least not one that Huber could keep in future books. So it was not until the next mystery novel, The Fall of Optimum House, that I created Huber’s young assistant, Andi.
Did you worry that Andi might steal the story away from R.A. when you sent her undercover to Optimum House?
Not really, I had too much fun with the fiery redhead from New Orleans, Antoinette LeJeune, better known as Andi. Also, my previous novels are written in the first person from R. A. Huber’s point of view. With the addition of Andi in The Fall of Optimum House and the books that follow, I write in the third person. This, of course, gives me a broader range; I can now go into the heads of all characters, including the murderer.
With six completed novels, you must have a routine by now. Do you outline your books? And which do you come up with first, the murder or the antagonist?
I don’t do much outlining on paper; it’s mostly going on in my head. I think about the plot for weeks before I actually write my first page. During that time I do research about location, possible ways of committing the murder, et cetera. As for which I come up with first, the murder or the antagonist, they sort of go hand in hand. I have to think up a motive, of course. With the exception of serial or gang killings – – which are not my thing as a writer – – there are only three main motives for murder: greed, passion, and self-preservation.
Optimum house is set in Big Bear. You’ve also set stories in Mexico, Albuquerque, NM, and Switzerland. Do you think it’s important for an author to vary the location of each book?
Personally, I enjoy doing a bit of travel writing; it keeps me entertained and hopefully the reader too. I always physically go to the locations set for my books, which means that I have to find a way to convince my husband that these are the perfect vacationing spots.
You’re latest novel is Final Stop Albuquerque. Tell us a little bit about this story.
Elena Campione seemed to have vanished into thin air. She had apparently left her South Pasadena residence without telling a soul. The police traced her to Albuquerque, New Mexico, where she was last seen boarding the shuttle bus to the Balloon Fiesta Park on the last day of the annual balloon festival. Bruno Campione hires R.A. Huber to find his missing wife. The investigation takes Huber to several towns in Arizona and New Mexico, while Andi pries into matters closer to home. When Elena’s body washes up at Lake Havasu, it is no longer a missing person case but a homicide. The women’s probing into the murder puts them both in harm’s way. Huber ends up in the hospital in critical condition, and Andi barely escapes with her own life.
You’re native tongue was German, but now you’re first language is English. Are any of your books translated in to German or other languages, or do you have plans to do this?
Actually, my native tongue was Swiss, which is a dialect and not a written language. In order to read and write, children in Switzerland are taught German in first grade.
To answer your questions, no, my books are only published in English.
We’d love to know what you have planned next. 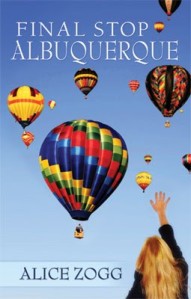 I am currently working on my next tale. Huber sends Andi under cover into a treatment facility for juvenile delinquents. The place is near Solvang, California. And that is all I’m going to reveal for now.
Thank you so much for being with us! You can find Alice’s lates book here. You can also visit her website to learn more about Alice and her books.

5 thoughts on “An Interview with Alice Zogg”