It was Virginia Wolfe who, in 1929, famously said, “A woman must have money and a room of her own, if she is to write fiction.”

I thought about that as I de-cluttered my office-space for the umpteenth time, trying to create more writing space. I’d even bought myself a new smaller office chair – petite, chrome with pale gray leather. Much prettier than the traditional tall black swivel chair I’ve had for years. You see, I don’t have an actual office – a separate room – but use the far corner of my living room, surrounded by bookshelves, for my office. It would be nice, I thought, to have a separate office with a door – that I could shut at the end of each work day, and ignore my mess of research papers and note pads.

Agatha Christie had a lovely, bright office in her sprawling country home, Greenway, on the River Dart in Devon. Now a National Trust property, the view from her office window is of green lawns and masses of colorful wild flowers. But she said she really did her thinking, about her plots and characters, in the huge claw-foot bath-tub in the upstairs Victorian bathroom.

Men who write fiction need a room of their own, too. I also visited Bateman’s estate: Rudyard Kipling’s Jacobean home in Burwash, Sussex. You can walk into his book-lined study and see his wide writing table covered with travel mementoes, his inkwell, pen and assorted hand-written pages. Next to the table is a daybed, where Kipling would spend part of his writing day reclining and thinking through his books before he committed his tales to paper. Tall windows overlooking rolling fields and farmlands, made the room surprisingly light.

Beatrix Potter began writing as a very young child, when her nursery was on the top floor of the family’s tall, Victorian London house. (At least she had a room of her own.) She would be brought downstairs to visit with her mother for an hour each afternoon. Her only companions were the household staff. When her lunch (delivered to her room daily on a tray) was late one day, a maid explained “Cook’s got mice in the kitchen!” Beatrix was intrigued: “What’s ‘mice in the kitchen’?” A houseman brought one of the mice in a cage for the little girl to see. The rest, as they say, is history. She asked to keep the caged mouse as company and began to draw the furry creature and write stories about it. Her literary work expanded when, as a teenager, they moved north into the countryside, where she found Mrs. Tiggywinkle and all the other characters she brought us.

In today’s world, most writers have a room of their own in which to write.  Although Carol  Higgins Clark started out writing on the corner of the kitchen table. She would retype her mother’s (Mary Higgins Clark) novels to send out to her agent. Carol said her mom explained everything she was doing, so that eventually Carol was able to write her own novels and found her own literary success, following her late mom’s very successful path. She now can afford her own office.

Jackie Collins wrote hugely successful novels set in glamorous Beverly Hills and Hollywood in her equally glamorous office, with big picture windows overlooking Beverly Hills. The furniture was light beige and luxurious, her desk semicircular with a high-back soft beige leather chair. Jackie wrote all her novels by hand on yellow legal pads. She wrote daily from nine to five, with a short lunch break.

Danielle Steel has not just one Room of Her Own – or office – but two: One is in Paris, where she grew up, and the other in San Francisco. She travels back and forth. The mother of nine now-grown children, Danielle has written almost two hundred books. Her passion for writing has led to an intense schedule. At her desk, built to resemble a stack of her books, Danielle begins at 8 am each day and does not leave until a draft is complete. Sometimes she just stops for four hours sleep and carries on until the book is finished. She wears her comfy cashmere nightgown and eats at her desk, with refills of de-caffeinated iced coffee and a stash of bittersweet chocolate. When she is in San Francisco, she writes on her 1946 Olympia standard typewriter. As I said, Danielle Steele has TWO rooms of her own in which to write her fiction. 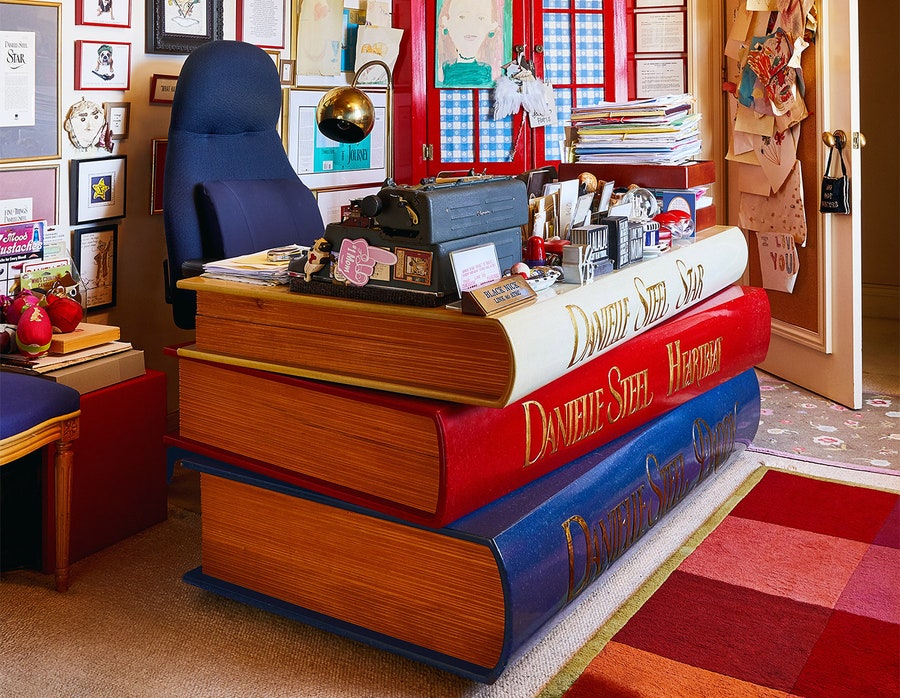 I remember visiting fellow Brit-born writer, Jacqueline Winspear. She had a lovely, small home-office, where she wrote many Maisie Dobbs novels. The walls were lined with shelves of books, research, and jumbo post-it notes, with a large table under the window and a comfy chair. Jacqui said that when she shut the door and closed the blinds, she could lose herself back in the Maisie Dobbs world of England in the 1930s.

I was envious that Jacqui had a room of her own in which to write. A room with a door that she could shut. I remember thinking that if I had a cozy office with a door that I could shut, then I could easily write at least one novel a year – just as Jacquie has done.

But now, as I settle down again at my table in the corner of the living room and start scribbling another segment of my next Lottie Topaz novel, I look across the room to the patio and the pool outside. I realize that I can’t continue without another cup of tea. Kitchen here I come. Then I have an idea for a contemporary mystery I’m working on set in St. Tropez. You see how quickly I distract myself?

While other writer friends have churned out dozens of novels, I realize that I have allowed my life and time to be torn in different directions, sorting other people’s problems and dramas. But, hey, I’m getting better. At least I am writing a few times a week, for a couple of snatched hours. I just want to be totally dedicated to writing several hours, every single day, like the aforementioned writers. What’s wrong with me?

Aha! I have found the real reason behind my lack of focus. I don’t have a

proper office – with a door that I can shut on all those distractions. I need a room of my own.

Well that’s my excuse for today…. What’s yours?