Skip to content
The Time, the Place, and the Story
As a writer, I am often asked, “Where do you get your ideas?” I have to tell them ideas fall out of the sky into neat little baskets, neatly typed out… Who believes that? Nobody. But ideas do come out of the blue or sometimes from a newspaper article or maybe while driving to work or maybe right before you fall asleep.
I remember watching a movie once and as I usually do, I was trying to guess where the movie was going. My idea ended up not being anything like the movie, so I wrote my own story. It turned into Eddie Buick’s Last Case.

One of my fellow Writers-in-Residence members, Jackie Houchin, used to write for our local newspaper. She did an article about the dam near us. Jackie took some great pictures of that eerie place before they retrofitted it. One of those pictures now graces the cover of Damning Evidence, a book about a local dam and murders that happen around it and my private detective, Gin Caulfield, who deals with that problem in the third book in the series. 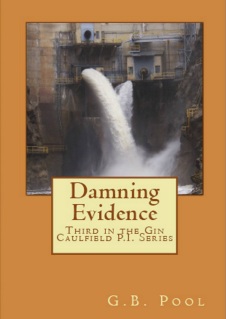 See, ideas do come from lots of places.
Now it’s the Christmas Season. There are a lot of holiday books out there… and movies, too. I have seen most of the movies and read a lot of the holiday stories. I’m what you call a “holiday-aholic.” I collect Santas. 3500 and counting to be exact. I knew someday I would write a Christmas story, but about what?
I didn’t want to write a children’s story with twenty pages and big drawings. I wanted one that grownups would like. And not a retelling of A Christmas Carol or It’s a Wonderful Life. It’s been done and frankly, I like the original versions just the way they are.
Several years ago I was walking through the Glendale Galleria here in California just as the stores had finished decking themselves out in tinsel and holly. I heard someone singing. He was using a microphone. The guy had a great voice. And he was wearing a Santa Claus suit. An idea exploded in my head as I stood there listening to him.

Now for a location. I might not live in Las Vegas, but I went to my 30th high school reunion there. I went to a boarding school in France for children of American military personnel and Vegas was a nice central location for us military brats. And what better place to locate my guy than in a place with one heck of a reputation.

Frankie Madison isn’t a big-time singer, so I put him in an out-of-the-way dive off the Strip. He loses his job, but his agent, who runs an employment agency, not a talent agency, gets him a gig singing Sinatra songs in another dive. It doesn’t go well. Then Frankie gets hit by a taxi. The driver is going to play an important part in the singer’s life.
Then Frankie’s agent calls. The only job left in town during the holidays is at the mall. What kind of singing gig is there in a mall? And he has to wear this suit… a red suit… a Santa Claus suit, but he can sing if he wants. And he does.
Frankie gets noticed by the female clerks in nearby shops and they like his voice. So does a young girl in a wheelchair. She loves Santa. And her father is a BIG TALENT AGENT.
Frankie finally gets another chance to sing, but this time it isn’t what he expects… it’s worse. And there is another problem. As Santa, he makes a promise to the young girl. And he makes another promise to the big talent agent as the struggling singer he really is. But this is his BIG CHANCE. Maybe his last chance. What does a guy do on Christmas Eve? And remember… this isn’t a kid’s fairy tale… or is it?
The Santa Claus Singer was my first Christmas story, but not my only one. 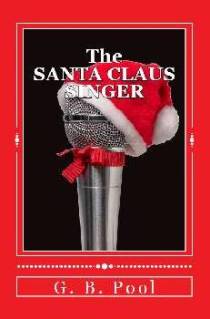 When I first moved to California many years ago, I worked in a miniature store where we sold dollhouses and we also had a holiday room filled with decorations for each season. During Christmas, I was surrounded by Santas and decorations and holiday magic. I came up with an idea for a story about a Polar bear. I drew up plans for a Santa castle where he and Santa live. Years later I wrote the story, Bearnard’s Christmas, then I had to build the castle… 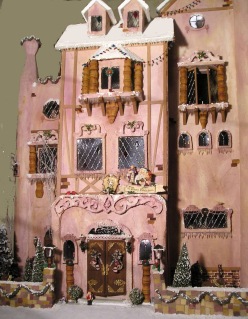 And make all the characters who live there…

You see how this happens? You get an idea and it carries you away. So whenever you wonder where writers get their ideas, just look around. Ideas are everywhere. A very Merry Christmas to you all.