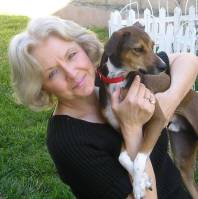 Whataya know. The brown guy came back. He’s got a plate of food. For me? Hot dog. I found another friend.

I limped toward him. Sympathy never hurts. Unless they throw another rock. He set down the plate and pointed to it. I gave him a good long stare just to let him know I’m proud. I can take it or leave it. See?

He left it. Good. I’m starved.

I ambled over to the plate and darn near licked the restaurant’s name off the china. That’ll hold me for another day. I wished the brown guy would step back outside so I could let him know how much I appreciated the meal. But, hey, I’m really not the sentimental type.

Now let’s see what L.A. has to offer a guy like me. I’m resourceful. I sauntered down the street, feeling pretty sure of myself. The street was crowded. This time of day in Las Vegas, I’d be chillin’ somewhere until nightfall.

That’s when I saw him. He ran out of an alley and made a grab for some old broad’s purse. The woman tried holding on, but she was no match for the thug. He pushed her to the pavement and ran back down the alley.

I was after him in a flash. I could outrun the bum without breaking a sweat and was crawling up his back before he knew what hit him. I landed a few good swipes across his neck and he shrieked like a girl. The purse fell from his hand as he tried to stop the bleeding. I gave him a few more whacks and then got off him, snatched the purse, and dashed back up the alley.

People were helping the old woman off the sidewalk. She was pretty shaken, but when she saw the purse sitting at her feet and me smiling at her, she looked a whole lot better.

It must be my face that gets ’em. She reached over and scratched under my chin. I swished my long, black tail and gave her a deep, sexy “meow.”
I followed her home.