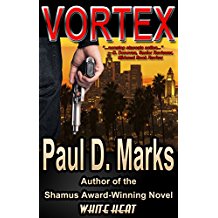 As writers, it’s tempting to remain focused on our own works-in-progress, but savvy authors know that one of the best ways to remain fresh is to read other books in our genre.  It’s also a good idea to move a step outside of your comfort zone when composing your reading list. Consider it a mental stretch. I’ve been gorging on mysteries, and though I usually stick to golden age, British traditional, and humorous, I recently picked up a crime thriller to round out my list. Here’s the scoop:

It’s apparent from the first page that Paul D. Marks writes stories that move. Fast. Hard-to-put-down fast. Which is probably why he has a Seamus Award for his novel, White Heat.

Vortex, protagonist Zack Tanner returns from Afghanistan to find that he isn’t the same shallow, fun-loving man that left Los Angeles for an adventure in the army. Unfortunately, no one else seems to have changed. Not his girlfriend, Jess, who is forever dreaming of stardom, nor his best friends and fellow soldiers, Bryan, Carlos and Matt.

Well, maybe Carlos and Bryan have changed. They believe that Zack has possession of something they desperately want, and suddenly the friendly banter takes a sinister turn. And the chase begins.

Marks, known for his love of Los Angeles noir, honors the moral ambiguity of that genre with a complex hero who straddles the line between being the good guy and being the guy who simply isn’t as bad as the rest.  Zack, who functions as the point-of-view character, presents an authentic voice reflecting the difficulties a soldier might experience when faced with his former life.

The supporting characters ring true, and you won’t know whether to love them, pity them, or hope they get bumped off before they cause additional damage. You can never be sure who’s on Zack’s side.

Marks knows the Los Angeles area well, and whether the scene takes place in the affluence-surrounded-by-grunge Los Feliz neighborhood, on the touristy Santa Monica Pier, or zooming up the famous Pacific Coast Highway, it feels as if you’re there.

The only problem with the novel is that it ends, because you won’t want to lose touch with Zack Tanner.

You can find out more about the “Barbie Death Ritual” at http://www.jacquelinevick.com.