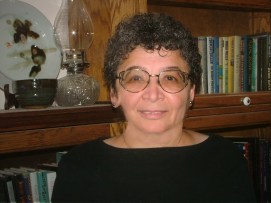 Madeline (M.M.) Gornell is the author of six award-winning mystery novels. Her current literary focus is Route 66 as it traverses California’s Mojave Desert. Madeline is a lifetime lover of mysteries, and besides reading and writing, is also a potter. She lives with her husband and assorted canines in the High Desert. For more information, visit her at website or Amazon Author Page.

These days I do feel very lucky though because my fellow Writers in Residence overflow with inspiration, encouragement, and expertise. And I also try to keep my eyes open for nuggets I can grab, steal, use, incorporate from fellow knowledgeable and sharing authors. So here’s the thought-crumb trail that led me to this post. Gayle Bartos-Poole’s recent post here http://tinyurl.com/glnyqrh, Patricia Gligor’s recent blog http://pat-writersforum.blogspot.com/2016_05_22_archive.html, Paul Alan Fahey’s latest collection http://tinyurl.com/h96kjbh , and John Daniel’s Joy of Story blog http://johnmdaniel.blogspot.com/ . I don’t write short fiction, actually write long winded prose—can’t help it—but I take inspiration wherever I can get it. Listening, then incorporating into my writing what I hear that makes sense. And to write short fiction, in my mind, you have to take all the things that make a well-told story, then pare them down to their essence. And it’s a look inside of my trying to do just that in this post.

Which next brings me to Gayle’s post on openings. She said it all so excellently! And one of the points she makes is setting the tone in the opening. Boy do I agree with that! The Preface and Opening I want to be my invitation to the reader, “Come on in and go on my journey.” Ha! Not there yet, but that’s the goal. So, “Come on in,” and see how I’m trying to get there.

My current work in process has to do with making a film in the desert. (Yes, I stole the film aspect from friend and mystery writer Marilyn Meredith’s book River Spirits(I loved it)- in her Tempe Crabtree series) http://tinyurl.com/zxglxdv . The making of the film in my WIP is a central theme for several of the characters, and in my mind what they think, see, and feel are very important to the whole book. So, I have spent significant time rewriting the opening scene—wanting a reader to see, feel, touch what I was seeing. (1)

Here’s what I first wrote:

It was still early morning. They’d actually taken off in what Pete considered darkness. What he now saw was the new light of the developing day. The sun was an almost pure–white globe with broadening bands of saturated yellow emanating—more like glowing—north and south from the globe. Bright without being blinding, colored without being saturated, and sparkling without being confusing. He could even feel it on his skin, then laughed at his hyperbolic silliness. Then he saw the chimney.

Georgeous. And Pete found it hard to get that stone-chimney out of his mind’s-eye. He almost sighed aloud.

It was still early morning, they’d actually taken off in what Pete considered darkness. What he now saw was a world gently kissed with the new light of the day. The sun was an almost pure white globe, with broadening bands of saturated yellow emanating—more like glowing—from the north and south along the horizon. He blinked, as if what he was experiencing wasn’t real. Indeed, how the sunrise could be bright without being blinding, colored without being saturated or intense, and sparkling without being confusing. Pete even thought he felt a sun type warmth on his skin, then couldn’t help but laugh at his hyperbolic silliness.

Georgeous. He found it hard to get that stone-chimney out of his mind’s-eye—looking at it as he was from the West, and it silhouetted against the sunrise. He almost sighed aloud.

You get the idea how that went for a few times. Every time I open the WIP to write more words, I first rewrite the opening. Peculiar possibly, but true. Next, I realized from my short-fiction friends, who cares about all that sunset stuff—where’s the people? Where’s the character POV? Why does a reader want to care? Or go along for the ride.

So here’s what I had a couple days ago:

“Did you see that stone-chimney?” Pete Lily was becoming more comfortable talking into his headset microphone, no longer shouting like when they started out. “Down there to the West. Just standing there by itself.” He wanted to include the pilot’s name in his observation—which he thought was Jack—though wasn’t sure, and didn’t want to risk calling him by the wrong name.

“Yep,” he heard his pilot answer. Pete waited for more Pilot comment. But after a long moment passed, he figured that was all he was going to receive by way of reply. Conversation probably not included in the price.

Even though it was a preliminary flyover, Pete had asked for the “door-removed option,” just like it would be during shooting. He was aware others in the business thought him the best scene-framer on the West Coast. He knew he wasn’t; especially when it came to aerial photography. I am darned good when it comes to a still-cut. But this, looking down, looking out, seeing it all from an omniscient-like view. That’s something else………

Where I started description-wise, is now on page three! But never fear, EVERY time I add to this book, edit, revise, whatever, I will refine this beginning. And I don’t yet know how it will end up. Why? Because at this point in my writing journey, I so agree with what Gayle said about opening tone, voice, and taking the reader (not only to the place) but into the action.

Writing isn’t always easy. But as Patricia Gligor points out in her timely for me post, “Enjoy the Journey.” Hopefully there’s also a writing nugget here for some of my fellow travelers.

[i] Also grabbing at my brain is a TV series entitled Aerial America.

19 thoughts on “Listening, and a Look Inside”