A former private detective and once a reporter for a small weekly newspaper, Gayle Bartos-Pool has one published book, Media Justice, and several short stories in anthologies, including  LAndmarked for Murder and Little Sisters Volume 1. The former Speakers Bureau Director for Sisters in Crime/Los Angeles, she is also a member of Mystery Writers of America. Her latest short story appears in the anthology, Dying in a Winter Wonderland, which was voted one of the Top Ten of Softcover Books as selected by the Independent Mystery Booksellers Association (IMBA) of 2008. Welcome Gayle!

With a background as a private investigator and a journalist, crime fiction seems a natural career choice for you. Do you use the experiences and skills you learned in your previous jobs to make your writing realistic?

Both previous jobs have given me insight that I probably wouldn’t have had. As a reporter, I learned that truth matters. In writing fiction, that means make sure you have the facts right. When you guess, you have a 50/50 chance of getting it wrong. Sometimes you might not realize you are guessing, but when somebody says you goofed, you try to do better the next time. I do lots research.

As for the P.I. thing, I learned two things. One, cops will cut you some slack if you make a mistake. Just don’t make the same mistake twice. And second, I learned to blend in. An undercover agent lives his environment. That means you have to be a good actor and have a nimble imagination. In the year I worked as a private detective I never blew my cover.

You went the self-publishing route with your first novel, Media Justice. What did you learn from that experience?

Also, self-publish as a last resort. I wanted my book published so my mother could see something of mine in print. She helped with the cost of publishing and read the next to final draft. She passed away before the book came out, so I dedicated it to her. Bittersweet results.

But if you keep hitting that brick wall with agents and just want to see your own book in print, go ahead and do it, but know that you have to sell that book, too. And if you don’t know how to get distribution, or approach bookstores, or do a book tour, or write press releases, or get on local TV, or…. There is a great deal of work AFTER you write the book. Be prepared. Or better still, write another book and see if the agents like that one better.

Recently, you put the finishing touches on your latest Ginger Caulfield mystery and presented it to your agent. Can you tell us what the book is about?

Gin Caulfield figured a bullet wound in the back had ended her career as a private eye, but when she and her husband stumble across a murder at the racetrack, all bets are off.

The first victim, Deirdre Delvecchio, had a loveless marriage of convenience. In less than twenty-four hours, Dee’s philandering husband, Donald, has not only convinced Gin to help him prove his innocence, but he also drops an even larger problem in her lap.

Racine Ingram, a pricy interior designer, is the problem. She does her best work at night, alone, in multi-million dollar companies.

Another possible suspect is Phil Lester, a guy with a temper, who was seen talking with Dee right before she was killed. And Phil has a few more surprises for Gin.

Gin manages to get copies of Racine’s business files and finds bloody evidence that ties someone to the murders. Then the prime suspect is killed …and Gin has to start all over again.

Several of your short stories have been published in anthologies, the latest in Dying in a Winter Wonderland. You also teach a seminar on short story structure. Is writing a short story like writing a mini-novel? Does it take as much thought?

Writing a short story takes just as much thought. Part is to ask yourself what you should include, and part is convincing yourself that you have to leave something out. You may have fewer characters, locales, and sub-plots, but they have to be interesting, maybe even more exciting than in a novel because you have less space to describe them, so you make them memorable. You must get to the point faster and you exit a lot quicker, so every word really counts. Short story writing will certainly sharpen your skills as a writer, and you will probably use those skills in your novels to make them sharper.

Can you share one tip from your writing seminar for authors who are considering the short story form?

The perfect plot is simple, not complex. Aristotle said that in The Poetics.

But something I tell my students is to always ask yourself three things about each sentence and/or paragraph you write:

Does it advance the story?

Does it enhance the story?

You have two protagonists–Ginger (Gin) Caulfield and Johnny Casino. How do you decide which character’s project to work on? Or do you work on multiple projects at the same time? 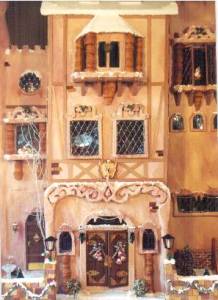 I always have a main project in the works and several other smaller projects going at the same time. I also work on my many miniature doll house projects, or other craft projects. The art work activates another portion of my brain that needs exercise every now and then. But I will certainly work on the one my agent is most interested in, even if I think the piece is finished.
One thing that reader’s can expect from your writing is razor-sharp wit. Do you ever “soften the blow” in rewrites?
No, I do just the opposite. I punch it up even more in rewrites. My characters take over and I let they have their way with the dialogue.

Until recently, you were the Speaker’s Bureau Director for Sisters in Crime/LA. You successfully built that program up over several years, putting on over seventy author panels and events. Could you share some tips with author groups looking to set up the same kind of events?

Work thy butt off. That is the only way you will get the name of your organization out in front of the public. This will also get other authors as well as yourself some valuable face time and help you all see what it takes to sell that book you just wrote, regularly published or self-published authors. Contact every library in your area and ask if they would like you to set up a panel or do a solo. Try senior centers and women’s clubs in the area. Even schools. Everybody loves to hear from real writers. Writers do what most people can’t do, so you are ahead of the game from the git-go. Make good contacts, spread your business card around, and remember to smile at everybody and talk to the audience. They are all potential customers.

There are several Johnny Casino shorts available. Are you planning to compile them into a collection?

I have already put the first eight Johnny Casino short stories into a book called The Johnny Casino Casebook. They are in chronological order and you meet several characters a few times as different cases come up. My agent has the book in her hot little hands.

What’s next for GB Pool? A Johnny Casino novel, perhaps? Or a Gin Caulfield short?

I have the third Gin Caulfield book in outline and the first four chapters completed. I am also lengthening a novella about a young woman and what might be a ghost into a novel. It’s a romantic adult fairy tale.

3 thoughts on “An Interview with GB Pool”