Well – who could have known…

I was heading for the Left Coast Crime ‘Murder’s A Beach’ writers’ conference in San Diego.

Two Southern California authors were being honored: Rachel Howzell Hall and T. Jefferson Parker. I was moderating a panel, “Hooray For Hollywood: Tinsel Town as a setting…” with Kellye Garrett, Lee Goldberg, Sherri Leigh James and Pat Broeske on Friday.

These conferences are always a great time to catch up with other writers who live far and wide – all coming together because of their love of books, of reading and writing – and especially mysteries. They readily share their knowledge, expertise on novel writing and their encouragement to those in pursuit of a publisher. It’s also a chance to meet their readers and fans.

I bumped into old friends writer/magician Stephen Buehler, wine-expert Nadine Nettmann, Catriona McPherson, Sheri James and Pat Broeske on my way in. But I’m getting ahead of my self.

It was a long, slow drive from Hollywood through a heavy rainstorm, averaging 9 miles an hour. 4 hours later, as I drew into the Marriot Mission Valley, I was looking forward to all the panels and lectures I had marked on the busy schedule.

Having checked in, left my bags in my room, I had already missed the ‘Not Too Distant Past: 20th Century Historical Mysteries’ panel that I wanted to hear, so I headed for the Rio Vista ballroom to listen to Toastmaster author Matt Coyle being interviewed. I stood at the back, as it was already underway.

A small cluster of somber-faced women with clip-boards arrived and stood at the back. Hmm. At a long pause in questions, they walked up to the front and one announced. “Please everyone stay in your seats – do not leave!” Then, the dreaded words followed that the San Diego Health Department was shutting down the conference, due to the Covid-19 virus concerns. Effective immediately. (The Arizona Book Festival and the L.A. Times Festival of Books would soon follow.)

The conference organizers had spent 3 year planning this what-would-have-been-wonderful 4 days of panels, discussions, celebrations and networking. They were, naturally, devastated. They announced they would be emailing us about refunds. Some in the audience suggested that we return any refund to put towards the huge cost of putting on this event. Then there was the discussion of the Saturday Night Award Banquet, when awards for the Best First Novel, Best Historical Novel and so on. No solutions yet. The crowd promised to meet up at the next Left Coast Crime conference in Albuquerque, New Mexico in April 2021.

We were asked to vacate the ballroom. Immediately.

“But we’re here, together, now – can’t we at least have the Opening Cocktail Reception before we leave?” rippled through the crowd. A glass of wine and hors d’oeuvres sounded very welcoming at that moment. Alas no. They shut that down too.

But, as we filed out of the room, the hotel staff wheeled out trolleys of spring rolls and wantons into the corridor, offering us plates to help ourselves as we left. They explained that they had cooked them, so we might as well eat. But the wine-bar was quickly moved out of sight!

The rest of the evening was spent congregating in the bar-café area as we figured out our next step. I had a relatively short drive, compared to many who had flown in from Canada or the East Coast, with return flights booked for Sunday.

The attendees include not only writers, publishers and editors, but many readers – fans. They seem to often be older women – often Agatha Christie fans who love meeting other mystery writers, collecting signed copies of their books. I wondered how many of these fans lived alone and, having had just had their big, exciting vacation crushed, would be returning to empty apartments and homes. I also thought about the struggling writers who spent hard-earned money on promotional items such as pens, notebooks, bookmarks to give out at various events during the weekend, attempting to sell their books. And then there were all of the extra hotel staff hired especially to work this conference. What happens to them?

Although I appreciate that this is insignificant compared to the health risks of those who are felled by this awful virus and the impending suffering of so many workers, travelers and businesses affected by the quarantines in force.

But it was sobering to observe this sliver of the rippling effect.

But I don’t want this to be all doom and gloom, for this, too shall pass. We will get beyond this bizarre situation we have all been thrown in together. And when we come out the other end, we will be much wiser and a lot more appreciate of the freedoms we usually enjoy, of the good friends we have, aware of the health and safety of our loved ones, friends and co-workers. Many of our parents lived through World War Two. The motto then was KEEP CALM AND CARRY ON.

I shall be working from home for the next couple of weeks, having closed down the Woman’s Club as a health precaution for our members, guests and volunteers. Although I still have a large stack of club paperwork to tackle, I shall be able to take more time to work on my Lottie Topaz books and a couple of new ideas I have.

It’s a chance for all of us to take some time to reflect on where we are going with our lives and our writing careers, to count our blessings and make wonderful plans for a bright future.

So just remember to check on friends and neighbors living alone. Stay safe and healthy.  See you on the other side of this pandemic.

So keep calm and carry on writing….! 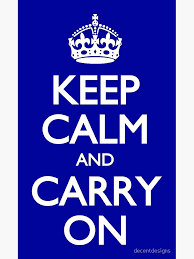 18 thoughts on “THE WRITERS’ CONFERENCE THAT WASN’T…  ”

Join 480 other subscribers
Follow The Writers in Residence on WordPress.com