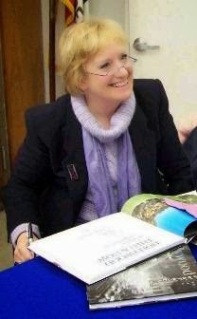 Late to the party, as usual – but I have just returned from visiting my family in England.

During our earlier Blogs I was away much of the time, in Kentucky, where my husband Rick and I were going back and forth, taking care of my ailing mother-in-law – until she finally passed away.
The thing that kept me sane during that time was the support of my WinR writer friends.
They encouraged me to keep going with my first mystery novel. After years working as an actress and a journalist, I was now the author of two non-fiction history books:

Hollywood Then and Now and Los Angeles Then and Now. I really wasn’t sure that I could ever complete a mystery novel: what did I know about this genre?  And so I tentatively started, “Lottie,”  about an English girl who works as an extra in silent movies in 1925 Hollywood. After her best friend is murdered Lottie vows to find the killer.  I lost myself in the world of Hollywoodduring Prohibition and fell in love with the characters that appeared on the pages.  In our WinR group we read each others pages and gave feed-back.  I felt way behind the other girls, as Gayle, Jackie and Miriam were already onto their next books, but I kept going.
In between my seemingly endless trips to Kentucky- little by little, with their encouragement, I worked my way through 400 pages until I finally wrote “The End.” We celebrated at The Rose Tree Cottage with a proper English Tea.
Now the next step was to get an agent and sell it. Harder than I had imagined, I researched, networked and submitted my novel and got positive responses, but no contract yet. As my mother-in-law had died, I had more time to work and so I began to write the second in the series, “Seven For a Secret…”
* * * * *
Then, without warning, my darling husband Rick Cameron died of a massive heart attack. My world stopped. My WinR friends rallied round me once again.
I did not have the heart to continue writing about Lottie. I could not even face submitting her to agents and publishers. I had a contract and a deadline to write the updated, revised versions of my Hollywoodhistory books. I plowed through this as it was dates, facts, research and not as emotional as my fiction writing on my novel.
A welcome distraction, I became consumed in saving a Hollywoodhistoric building, The Woman’s Club of Hollywood, from being turned into condos.
But still I could not bring myself to return to my novel “Lottie.” Meanwhile, our WinR group now had two wonderful additions, Kate Thornton and Madeline Gornell and we had decided to revive our Blog.
I retreated back to Englandto spend healing time with my brothers and sister and their children. They reminded me how proud Rick was of my writing – and especially of my Lottie Topaz novel.
My dear WinR friends have been very patient waiting for me to emerge from my dark cocoon. Without them I would not be writing this, the first step back. And today I pulled out my Lottie files and started some notes for the next literary agent who will get the chance to read about Lottie. So I guess I have my New Year’s resolution …….

6 thoughts on “Catching Up with Rosemary Lord!”