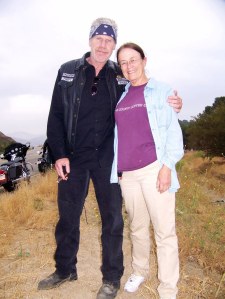 I used to be very shy. Whenever I tried to speak to a group of people I’d get flushed and start shaking and sweating. My vocal chords would squeeze shut and my voice would come out in a squeak!

On oral report days at school, I would stay home and take the bad grade.

And then, by a fluke, I was elected leader of a women’s group at my church. “No, no, no!” I protested in panic. “I can’t do this!” They smiled and patted my quivering hands. “You’ll be fine,” they said.

The first meeting was excruciating. I’d prepared. I’d brought my notes. Everyone waited expectantly. I opened my mouth … and squeaked. They smiled and nodded. I squeaked again then managed a few words. Another squeak and a few more words. And then, thank God, it was over.

I tried to quit a dozen times, but they wouldn’t let me.

Gradually…I stopped squeaking. Then one day I realized I was having fun.
What happened? What had changed abject terror into exhilaration?

Then it hit me, I’d changed my format from talking to asking. I’d put the pressure to communicate on the others. Nicely, of course, and with genuine interest in their answers, but nevertheless, requiring them to respond.

Yes, I prepared questions, and yes, those questions led to the point (or lesson) I wanted to make, but they were doing the talking, and I was doing the listening.

It was an epiphany. I could lead/teach a class by posing (prepared) questions. (Do you see where this is going?)

I also discovered I’m nosey. Why do people act and speak they way they do? What motivates them? What makes them mad? sad? hurt or lonely? How did they get started in their job? Why are they are getting a divorce? a tattoo? breast implants?

So I ask them and I take notes. Then I compile the answers into an article or story and submit it for publication. Voila! An interview!

Most people want to tell their story (especially celebrities), and some will tell you anything if you promise not to print it.

(Confession: Sometimes in an interview I ask questions I’m personally curious about but never plan to put it in a story. Oh, the things I could tell you!)

That’s how – when they were filming the TV series “Sons of Anarchy” in front of my house – I could walk up to Ron Perlman and talk to him like he was my “Uncle Fred.”

3 thoughts on “How Sunday School Led Me to Celebrity Interviews”