A former private detective and reporter for a small weekly newspaper, G.B.Pool writes the Johnny Casino Casebook Series and the Gin Caulfield P.I. Mysteries. She teaches writing classes: “Anatomy of a Short Story,” “How To Write Convincing Dialogue” and “Writing a Killer Opening Line.” For more information about Gayle and her books, visit her website.

Whether you are writing a novel, short story, or screenplay, you want to open your story with a BANG!

The Most Important Lesson:

If you want to give yourself a better chance to have your short story, novel or screenplay picked up by an agent, a publisher, or a producer, you have to get their attention FAST. If you are lucky, an agent/publisher will read your first chapter. Usually they will just read the first few pages or maybe only the first paragraph. This holds true for a short story that you might submit to a contest. Agents get 50 manuscripts a day and they are looking for any excuse to toss your work into the round file. You want to make your opening a GRABBER.

Make sure the opening scene has some relevance to the rest of the story, whether it actually figures into the plot or echoes the theme. Opening in a beautiful flower garden better reveal a dead body in the posies. Or hearing about a long ago train wreck better foretell another “train wreck.”

What exactly does an Opening Line/Paragraph/Scene in a Short Story, Novel or Screenplay do?

The Opening should do 2, 3 or all of these things.

When the OPENING Sets the Tone (funny/mysterious/adventure/children’s lit/chick lit/geezer lit). Don’t start out funny and turn it into a slasher film.

This opening has dark humor; absolutely no remorse (Tone); it’s probably a mystery (Genre); it starts right in the middle of the beginning (Fast); and the reader will want to know if the killer gets caught (Problem).

EXAMPLE: When TONE is established by VOICE

Archie Wright’s the name. Dishing dirt’s the game. My sandbox: Hollywood. The most glamorous and glitzy, vicious, and venomous playground in the world. If you come for a visit, bring your sunscreen and your shark repellent. If you come to stay, let me warn you, Tinsel Town eats up and spits out a hundred just like you every day. Sometimes it isn’t pretty, but it’s my job to chronicle the ebb and flow of the hopeful, the helpless, and the hapless. My best stories come from the dark side of Glitzville.   “Glitzville” by G.B. Pool

This opening is written in first person which is very one-on-one (Tone); the glib Hollywood-eze sets the Genre; there is a little dark humor, too. (Tone).

Why does it always rain when I’m in Berlin? Ralph Barton thought, feeling the oppressive dampness close in around him.            The Odd Man by G.B. Pool

This opening classifies itself as historical, Cold War story (Genre); the very nature makes it a taught, spy drama (Tone).

The used Cadillac Eldorado he bought six years earlier came with a stack of options, most of which didn’t work. The gas tank was currently empty, and so was his wallet, so the mint green boat sat at the curb near his place and he took public transportation.

But in this example, the opening doesn’t set the genre. It does set the TONE. We have a down-on-his-luck guy riding the Monorail (Mono means: one/lonely). It does state a PROBLEM: the guy doesn’t have much money.

Here is another way to set the Genre for this story: Write a GRABBER book blurb

An out-of-work lounge singer ends up playing Santa Claus at the mall and makes a very sick young girl a promise that could cost him everything, but sometimes the best gift you can give is yourself.

The BLURB classifies this as a holiday story (Genre); How is this guy gonna overcome his situation? (Problem).

Another way to set the Genre so the reading public knows what type of book you have written: Have the book’s COVER fit the story you are telling.

If you have a publisher who wants to design the cover without your help, write a killer book blurb to capture the essence of your story and/or make sure your OPENING reflects the type of book you are writing. These might be the only times you have input.

You can always submit a few cover ideas yourself. Just make sure you know what your story is about. 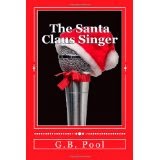 The Opening can State the Problem.

EXAMPLE: When a body turns up at a local dam, P.I. Gin Caulfield has to get to the bottom of it, but the bottom can be very deep.

“How long has he been in the water?” I asked, knowing by the bloated, blue body it was too long. What was left of the corpse’s clothes had shredded, exposing large masses of distended flesh.

“More than a week,” said the sheriff’s deputy. “It got itself tangled in the bramble caught against the rocks down there. If you hadn’t noticed it bobbing up, it could have been there a lot longer. Good call, lady.”

No, my friend, it was a lousy call. I hate finding dead bodies. No matter what they show on TV, private detectives don’t like corpses. We like the hunt… the chase… the capture. If everybody is still breathing at the end, great. If somebody’s dead, we hope it’s the other guy… or gal. I have seen my share of bad women. We’re not all Betty Crocker.                        Damning Evidence by G.B. Pool

In this opening we have a female detective (Genre); she’s probably been around the block a few times (Tone); she has a conscience and a cynical sense of humor. (Tone); the dead body (is the Problem).

EXAMPLE of an OPENING: “I already told you. I met the guy in a bar. We got to talking. Somehow he knew I’d been in trouble with the law before.”

The OPENING shows a guy used to being in trouble. The ENDING sees that he has been talking to a cop about a crime all along, though I never mentioned the other guy was a cop until the last word in the story.

HINT: HOOK the READER with a compelling reason to continue reading; have an “out-of-whack” event; something that changes the protagonist’s world view profoundly and the reader just has to know what happens next.

John Smith didn’t know he was an amnesiac. He discovered that and the fact he was married to two women when one of them turned up dead.

The best way to make sure you are opening your story with a BANG is to go over the 5 Elements to any story – Plot, Character, Dialogue, Setting, and the Point of the Story – The Point is the most important. No Point – Why write it?

The POINT should be reflected in your OPENING!

Take another look at your story and see if these questions have been answered. If it does, you will have a Killer Opening to your story.

natomy of a Short Story Workbook will be out this summer on Amazon. It’s a great way to analyze your story whether it’s a novel, screenplay or short story. It will help with your Opening and your Ending and everything in between.

12 thoughts on “How to Write a Killer Opening”